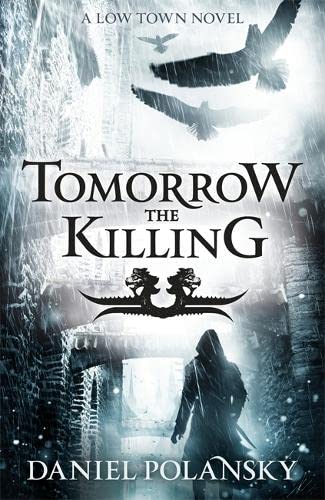 Tomorrow, the Killing
by Daniel Polansky

Once he was a hero of the Great War, and then a member of the dreaded Black House. Now he is the criminal linchpin of Low Town.

His name is Warden.

He thought he had left the war behind him, but a summons from up above brings the past sharply, uncomfortably, back into focus. General Montgomery's daughter is missing somewhere in Low Town, searching for clues about her brother's murder. The General wants her found, before the stinking streets can lay claim to her, too.

Dark, violent, and shot through with corruption, TOMORROW, THE KILLING is a fantastic successor to one of the most heralded fantasy debuts of recent times.

"With THE STRAIGHT RAZOR CURE, Polansky pushed the envelope of modern fantasy. With TOMORROW THE KILLING, he tears through the envelope and pushes for horizons yet unseen." * Myke Cole, author of Control Point *
'In Tomorrow the Killing, Polansky shows us he is no one-book wonder... If you haven't read Polansky yet, you must remedy this ASAP. He writes gripping, addictive stories with a grim eloquence...Very, very highly recommended. Polansky is definitely among my new favourite authors. Essential reading.' * civilian-reader.blogspot.com *
'Tomorrow The Killing delivers more of the same noir-esque brilliance that placed The Straight Razor Cure amongst the top releases of last year.' * The British Fantasy Society *

Praise for THE STRAIGHT RAZOR CURE

'Quite brilliant... The Straight Razor Cure is as good a debut as I've read in along time. [It] has it all - and as the name suggests, it is sharp, steely and viciously bloody. Highly recommended'

* John Berlyne, SF Revu *
'Quite possibly the newest, freshest fantasy novel since Patrick Rothfuss' The Name of the Wind. It is, in short, the bastard son of George R. R. Martin and Raymond Chandler, an unusual combination of hard-boiled crime novel in a fantasy world setting. * readerdad.co.uk *
'Polansky's writing is confident and punchy from the offset. The action rips along at a brilliant pace allowing us to experience this gritty world through the eyes of a thrilling, dangerous, flawed, yet strangely endearing protagonist. This is modern, dark fantasy at its best and a debut to be envied.' * British Fantasy Society *
'Polansky hits all the right notes in his intelligent first novel, a blend of dystopian fantasy and hard-boiled crime... Sharp, noir-tinged dialogue and astute insights into class struggle mark Polansky as a writer with a future' * Publishers Weekly *
'A strong debut novel with a hero who doesn't waste time worrying about the moral implications of cutting someone's throat' * Kirkus Reviews *
'Polansky transplants his love of crime noir into a magic-steeped, secondary-world fantasy setting. It's an inherently troublesome mash-up that could only work in the hands of a silly satirist or a deft, sensitive dramatist with the blackest sense of humor. Polansky is wholeheartedly the latter - and Low Town is brilliant proof ... Wielding vivid characters and scalpel-sharp banter worthy of fellow dark fantasists Scott Lynch and Joe Abercrombie, Polansky ratchets up the pace ... Polansky has managed to craft an assured, roaring, and rollicking hybrid, a cross-genre free-for-all that relishes its tropes while spitting out their bones. And he does it all while spinning one hell of a gripping mystery' * avclub.com *
'Daniel Polansky has crafted a thrilling novel steeped in noir sensibilities and relentless action, and set in an original world of stunning imagination, leading to a gut-wrenching, unforeseeable conclusion. Low Town is an attention-grabbing debut that will leave readers riveted . . . and hungry for more' * missiontoread.com *
An impossible to put down read, showing how dark fantasy can truly be * thefoundingfields.com *
'The Straight Razor Cure is dark, eloquent work filled with a very real presence that permeates both the world and the characters within it. Polansky has created a wickedly delicious fantasy that leaves a profound impression on the reader. Despite the plague, murderers and dark magic, I can't wait to pay another visit to Low Town' * mithrilwisdom.blogspot.com *
'I can't remember when I last enjoyed a fantasy book this much' * Books Monthly *

Daniel Polansky was born in Baltimore, Maryland. He can be found in Brooklyn, when he isn't somewhere else. His debut novel, THE STRAIGHT RAZOR CURE, received great acclaim. TOMORROW, THE KILLING is the second novel in his 'Low Town' series.

GOR004268011
Tomorrow, the Killing: Low Town 2 by Daniel Polansky
Daniel Polansky
Used - Very Good
Hardback
Hodder & Stoughton
2012-10-11
368
1444721348
9781444721348
N/A
Book picture is for illustrative purposes only, actual binding, cover or edition may vary.
This is a used book - there is no escaping the fact it has been read by someone else and it will show signs of wear and previous use. Overall we expect it to be in very good condition, but if you are not entirely satisfied please get in touch with us.