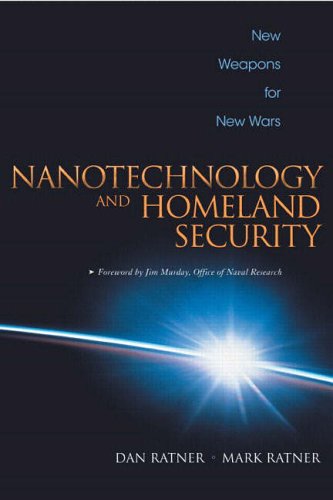 Out of Stock
$41.99
inc. GST
Offers an introduction to the field of nanotechnology. This work is useful to security and defense - perhaps the most relevant sectors of society demanding advances that only nanotechnology can provide. It identifies the issues that need to be examined, and to be dealt with, if nanotechnology is to become a mature, and an asset to our world.
Like New
Only 0 left

How nanotechnology will transform the war against terror. Nanotechnology offers immense potential for fighting terrorism without sacrificing our open, free, and democratic society. This book covers the significant opportunity to use nanotechnology to prevent terrorism and other threats to security as well as mitigate their impact. Co-authored by one of the field's pioneers and featuring remarks from other nanoscience researchers and industry leaders, Nanotechnology and Homeland Security is written for every educated citizen who wants to understand the weapons of choice in the battle of our generation.Coverage includes: *Nanotechnology-based sensors: fast, cheap, accurate tests for explosives, radiation, weapons of mass destruction, and food/water contamination *Nanotechnology-based smart materials: protecting homes, offices, and first responders *Nanotechnology-based biomedical research: revolutionary treatments for chemical/biological attacks and trauma *Nanotechnology-based energy generation technologies: ending the world's dependence on oil *Nanotechnology-based remediation technologies: healing the effects of environmental damage and ecoterrorism Daniel and Mark Ratner tell you what's real today-and what it'll take to transform tomorrow's applications from science fiction to reality. Along the way, they debunk the myths of nanotechnology, and offer new insight into its profound ethical, political, and social implications. Nanotechnology is an enabling technology that could have an impact on the world that dwarfs the Internet's impact on our daily lives.Mark and Dan Ratner have ably illustrated some of roles that nanotechnology can play in our future, including how it could enhance national security, make soldiers more effective on the battlefield, or even help prevent attacks on our homeland. As a member of Congress who is active in advancing the development of nanotechnology, I encourage other policymakers, educators, and social visionaries to become cognizant of tomorrow's possibilities.-U.S. Representative Mike Honda, Member, House of Representatives Committeeon Science. The authors do an excellent job of using their expert knowledge to clearly communicate complex topics into a clear, well-organized examination of the impact of nanotechnology on national security.-Lynn E. Foster, Jr., Nanotechnology Analyst, Squire Sanders & Dempsey, and author of the seminal Nanotechnology Yellow Pages study. U.S. policy-makers and -shapers: READ THIS BOOK! Then get to work.-Rocky Rawstern, Editor, Nanotech-Now.com. Nanotechnology and Homeland Security provides the reader with the most important weapon of all-knowledge.It is as much a blow against ignorance and hype as it is a primer for how real nanotechnology should contribute to our future security. Mark and Dan Ratner confront the utopians and the alarmists by debunking both 'molecular assemblers' and 'gray goo.' This book is informative, thought-provoking and very readable.-R. Stanley Williams, HP Senior Fellow, Hewlett-Packard Labs. The book is a clear overview of the two subjects of nanotechnology and countering terrorism, but its special strength is the thoughtful way it weaves these two subjects together."-R. Stephen Berry, Department of Chemistry and the James Franck Institute, The University of Chicago, Chicago, Illinois. This book does an excellent job introducing the field of nanotechnology to the layperson by showing its promise for security and defense-perhaps the most relevant sectors of society demanding advances that only nanotechnology can provide.- Josh Wolfe, Managing Partner, Lux Capital, and Editor, Forbes/Wolfe Nanotech Report This book identifies many of the issues that need to be examined, and to be dealt with, if nanotechnology is to become a fully mature, fully productive asset to our nation and to the world.-James Murday, Chief Scientist, Office of Naval Research. This is the first example of an accessible book discussing the highly relevant field of nanotechnology and its applicability to homeland security in laymen's terms. The Ratners successfully cut through the hype surrounding the topic, while stimulating thoughts on many possibilities of the technology, especially in the defense and medical arenas. Mark Ratner is an internationally recognized expert in the field of nanotechnology with an in-depth knowledge in the area. He is respected by those in the academic and industrial research communities as a creative thinker with a long-standing track record of pioneering technical concepts for development of new materials.-Dr. Susan Ermer, Lockheed Martin Advanced Technology Center, Palo Alto, California

DANIEL RATNER is an engineer and technology entrepreneur who has founded three startup firms, including Driveitaway.com, where he currently serves as CTO. He is also an industry advisor to several other high-tech ventures, and was recently awarded the prestigious "30 Under 30" entrepreneurs' award by Philly Tech Magazine.

MARK A. RATNER is Charles E. and Emma H. Morrison Professor in Chemistry at Northwestern University. With Ari Aviram, he originated the field of molecular-scale electronics. Ratner won the 2001 Feynman Prize in Nanotechnology for theoretical achievements that have advanced the development of molecular nanotechnology.

The Ratners have also co-authored Nanotechnology: A Gentle Introduction to the Next Big Idea.


1. Introduction.
The Great Awakening. The Case for Nanotechnology.

3. The New Battlespace.
The Changing Face of War. Weapons of Mass Destruction: The Challenge. Weapons of Mass Destruction: The Solutions. Part I: Detection. Part II: Protection. Part III: Remediation. The Modern Soldier. A Coat of Many Colors. Comments of Timothy M Swager, Professor of Chemistry and Associate Director, Institute for Soldier Nanotechnologies. The Man-Machine Interface. Out of Harm's Way. Better, Faster, Tougher, Smarter. Batteries Not Included. The Tip of the Iceberg. Comments of Debra Rolison, Naval Research Laboratory, Washington, DC.

GOR010398861
Nanotechnology and Homeland Security: New Weapons for New Wars by Daniel Ratner
Daniel Ratner
Used - Like New
Hardback
Pearson Education (US)
2003-10-24
176
0131453076
9780131453074
N/A
Book picture is for illustrative purposes only, actual binding, cover or edition may vary.
The book has been read, but looks new. The book cover has no visible wear, and the dust jacket is included if applicable. No missing or damaged pages, no tears, possible very minimal creasing, no underlining or highlighting of text, and no writing in the margins.