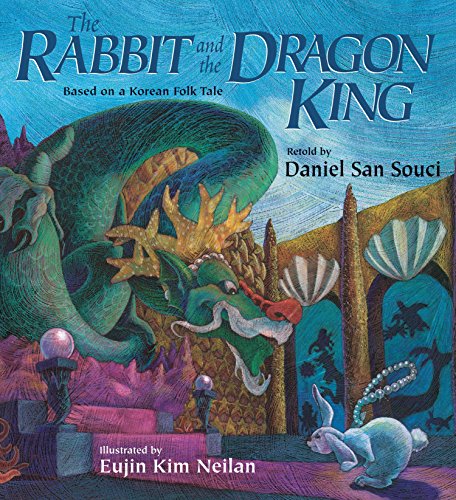 The Rabbit and the Dragon King
by Daniel San Souci

The Rabbit and the Dragon King Summary

The Rabbit and the Dragon King: Based on a Korean Folk Tale by Daniel San Souci

The dragon rules the ocean deep and all its creatures. He is a great king - but an even greater hypochondriac. Though his physician can find neither cause nor cure for his latest ailment, the king believes he is not long for this world. "Here we go again," says the queen. After consulting with his court magician, the king is convinced that eating the heart of a rabbit will cure what ails him. Turtle volunteers to swim ashore and trick a rabbit into visiting the undersea palace. When the rabbit comes face-to-face with the dragon king and learns her fate, she shows that she has a few tricks of her own. Daniel San Souci's splendid retelling finds new riches in an ancient tale that was recorded as early as A.D. 642 during Korea's Shila Dynasty. Eujin Kim Neilan's breathtaking paintings depict a magical, underwater world, where dragons and turtles and rabbits mingle on the ocean floor. From the author and illustrator of In the Moonlight Mist comes a stunning new version of one of the best-loved folk-tales of Korea.

Customer Reviews - The Rabbit and the Dragon King

The Rabbit and the Dragon King Reviews

"Will enchant primary-age readers and engage older readers who will delight in Rabbit's cleverness." --Kirkus Reviews

"This story would fill a need for Korean stories, but the main reasons to purchase it are its delightful prose and beautiful illustrations." --Library Media Connection

Eujin Kim Neilan is the illustrator of The Best Winds, by Laura E. Williams, and In the Moonlight Mist: A Korean Tale, retold by Daniel San Souci. She lives in Natick, Massachusetts.

GOR008243644
The Rabbit and the Dragon King: Based on a Korean Folk Tale by Daniel San Souci
Daniel San Souci
Used - Very Good
Paperback
Boyds Mills Press
2006-01-01
32
1590784189
9781590784181
N/A
Book picture is for illustrative purposes only, actual binding, cover or edition may vary.
This is a used book - there is no escaping the fact it has been read by someone else and it will show signs of wear and previous use. Overall we expect it to be in very good condition, but if you are not entirely satisfied please get in touch with us.