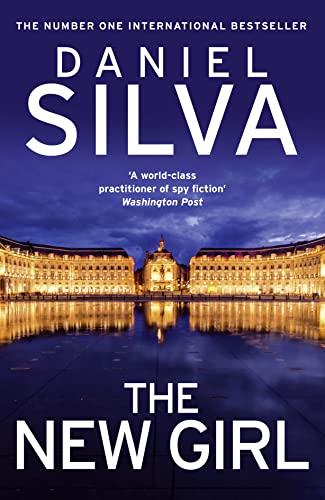 The New Girl
by Daniel Silva

The New Girl by Daniel Silva

At an exclusive school in Switzerland, mystery surrounds the identity of the beautiful girl who arrives each morning in a motorcade fit for a head of state. She is said to be the daughter of a wealthy international businessman. In truth, her father is Khalid bin Mohammed, the crown prince of Saudi Arabia. Once celebrated for his daring reforms, he is now reviled for his role in the murder of a dissident journalist. And when his child is brutally kidnapped, he turns to the one man he can trust to find her before it is too late.

Gabriel Allon, the legendary chief of Israeli intelligence, has spent his life fighting terrorists, including the murderous jihadists financed by Saudi Arabia. Prince Khalid has pledged to break the bond between the Kingdom and radical Islam. For that reason alone, Gabriel regards him as a valuable if flawed partner. Together they will become unlikely allies in a deadly secret war for control of the Middle East. Both men have made their share of enemies. And both have everything to lose.

Praise for The New Girl:

`As enjoyable as ever. Allon is a smart creation' Financial Times

Praise for House of Spies:

Praise for The Black Widow:

`Not only gripping but works as an IS history primer' Sun

`It is Silva's creative genius that keeps it all moving, as well as his mastery of storytelling that keeps the intense momentum of the plot ever pushing forward' Huffington Post

`A fitting final mission for one of fiction's greatest spies... A dark thriller for difficult times' Kirkus Review

`Silva builds suspense like a symphony conductor... A winner on all fronts' Booklist

`Silva is a master of suspense' Barbara Taylor Bradford, The Week

Daniel Silva is the award-winning, #1 New York Times bestselling author of The Unlikely Spy, The Mark of the Assassin, The Marching Season, The Kill Artist, The English Assassin, The Confessor, A Death in Vienna, Prince of Fire, The Messenger, The Secret Servant, Moscow Rules, The Defector, The Rembrandt Affair, Portrait of a Spy, The Fallen Angel, The English Girl, The Heist, The English Spy, The Black Widow, House of Spies and The Other Woman. He is best known for his long-running thriller series starring spy and art restorer Gabriel Allon. Silva's books are critically acclaimed bestsellers around the world and have been translated into more than 30 languages. He resides in Florida with his wife, television journalist Jamie Gangel, and their twins, Lily and Nicholas. For more information visit www.danielsilvabooks.com

GOR010090166
The New Girl by Daniel Silva
Daniel Silva
Used - Very Good
Hardback
HarperCollins Publishers
2019-07-18
496
000828086X
9780008280864
N/A
Book picture is for illustrative purposes only, actual binding, cover or edition may vary.
This is a used book - there is no escaping the fact it has been read by someone else and it will show signs of wear and previous use. Overall we expect it to be in very good condition, but if you are not entirely satisfied please get in touch with us.