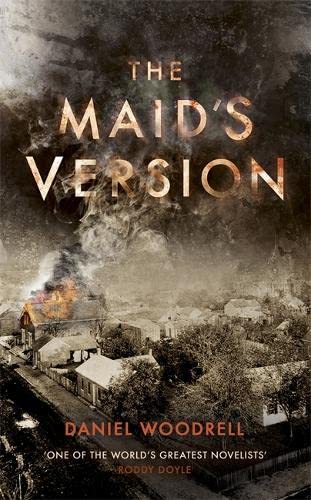 The Maid's Version by Daniel Woodrell

By the acclaimed author of Winter's Bone, the dark, glittering story of two families divided by class and linked by a mysterious tragedy.

The Maid's Version by Daniel Woodrell

In 1929, an explosion at a dance hall in a Missouri town killed 42 people. Who was to blame? Mobsters from St. Louis? Embittered gypsies? The preacher who railed against the loose morals of the waltzing couples? Or could it have been a colossal accident?

Alma Dunahew, whose scandalous younger sister was among the dead, believes she knows the answer - and that its roots lie in a dangerous love affair. But no one will listen to a woman from the wrong side of the tracks. Maid to a prominent citizen, wife of a hopeless alcoholic, her dogged pursuit of justice makes her an outcast and causes a long-standing rift with her own son. It is only decades later that her grandson listens to her account and unearths the sorry truth.

With remarkable economy, Daniel Woodrell tells a richly layered story of passion, betrayal and vengeance and two families at opposite ends of the social scale connected down the generations by a festering secret. This is a stunning novel by a writer hailed by Roddy Doyle as 'one of the world's greatest novelists'.

Daniel Woodrell is the American writer we increasingly look to for the latest urgent news on the American soul. The Maid's Version is a beautiful engine of a novel, whose cogs were not entirely made by human agency, one might hazard to say.
As regards the level of reading pleasure, the highest. As regards the level of literary achievement, the highest.

-- Sebastian Barry, author of On Canaan's Side
The Maid's Version is stunning. Daniel Woodrell writes flowing, cataclysmic prose with the irresistible aura of fate about it. -- Sam Shepard
Under the grisly, seductive, colloquial tone is a very unusual thing - a communitarian novel: a novel concerned with how we live - and sometimes die - together, how we share experiences through the rituals of speaking and writing, because that is the fundamental spirit and purpose of language. * Sarah Hall, Guardian *
Blends the folkloric with Southern gothic, historical recapitulation with fictional investigative journalism, all suffused in his matchless tenderness of feeling . . . In The Maid's Version, the oral and the poetic tangle and splice. Alma and Ruby are illiterate: the grandson's narration raises their tongue to occasional elegiac beauty. * Stevie Davies, Independent *
Skilfully interweaving two narratives, he gradually reveals the truth about a love affair in 1920s Missouri and an explosion in a dance hall that killed dozens of people. Woodrell's unique prose - laconic and yet . . . possessed of an offbeat lyricism all its own - is well suited to a story reminiscent of a folk tale passed down through the generations. * Nick Rennison, The Sunday Times *
Woodrell orchestrates a captivating, almost operatic narrative of how tragedy and grief can transform places and people . . . With an economical brilliance similar to that of Denis Johnson . . . Woodrell delivers a stunning story of one small town, and all of its profound complexities and opaque mysteries. * New York Times Book Review *
Just 164 pages. But Woodrell can pack more story, truth and human emotion into that space than most writers can in three times the pages . . . The Maid's Version is a superbly textured novel . . . Readers will be reminded once again why critics so often compare him to William Faulkner and Cormac McCarthy. * Bruce DeSilva, Associated Press *
Woodrell's distinctive qualities are his very puckish humour and the way he drapes extravagantly writerly prose on the bones of a ferociously exciting whodunit . . . In Daniel Woodrell's West Table, neighbours and hearts come as crooked as can be and are all the more fascinating - and yes, loveable - for that. * Sam Leith, Literary Review *
Woodrell's evocative, lyrical ninth novel is deceptively brief and packs a shimmering, resonant, literary punch . . . From an economy of poetic prose springs forth an emotionally volcanic story of family, justice, and the everlasting power of the truth. * Publishers Weekly *
Woodrell's majestic gifts create an unforgettable impression of one woman's life played out against a horrific crime that was never solved but remained to haunt all involved. * Irish Times *
Woodrell's prose is breathlessly good. His sentences are pure music, with apocalyptic echoes, vividly descriptive but with a peculiarly archaic feel that marks them out as highly original . . . If a better novel is published this year then it will have to be something truly extraordinary. * Irish Examiner *
[He has] a genius for compression. The much-lauded Woodrellian prose continues to dazzle . . . In its fealty to the Athenian conception of tragedy - that collision of the accidental and ordained - The Maid's Version is one more resplendent trophy on the shelf of an American master. * William Giraldi, The Daily Beast *
I'd gladly sign a petition to see Mr. Woodrell included on any roll call of America's finest living writers * Sam Sacks, Wall Street Journal *
The Maid's Version will sweep readers away . . . Woodrell knows how to command a reader's attention - not so much with plot twists, but with well-built sentences. They can sound almost biblical, if the Bible had been written in the Ozarks . . . Readers will simply fall into the story. * Bob Minzesheimer, USA Today *
In fewer than 200 pages, but with a richness of theme and character worthy of the weightiest Victorian novel, Woodrell brings West Table to life in the varied experiences of its sons and daughters . . . The Maid's Version affirms Daniel Woodrell's niche in American Literature. * Wendy Smith, Washington Post *
Gorgeously gritty . . . Inspired by true events, Daniel Woodrell's probing, powerful tenth work of fiction confirms his status as one of our finest little-known writers. * Leigh Haber, O, The Oprah Magazine *
Short chapters reveal only the most telling and scarce details of Woodrell's lineup of characters, lending the story a spare, bitter charm . . . No craftsman toiling away in a workshop ever fashioned his wares so carefully. A commanding fable about trespass and reconstruction from a titan of . . . fiction. * Kirkus (starred review) *
Daniel Woodrell was born in the Missouri Ozarks, where he still lives. He left school and enlisted in the Marines the week he turned seventeen, and received his BA at the age of twenty-seven. He also has an MFA from the Iowa Writers' Workshop. He is the author of eight novels including Winter's Bone, the film of which was nominated for four Oscars in 2011, Woe to Live On, the basis for the film Ride with the Devil directed by Ang Lee, and Tomato Red, which won the PEN West Award for fiction in 1999. Five of his novels have been selected as New York Times Notable Books of the year. His most recent book was the story collection The Outlaw Album, published by Sceptre in 2011.
GOR005445345
9781444732832
1444732838
The Maid's Version by Daniel Woodrell
Daniel Woodrell
Used - Very Good
Hardback
Hodder & Stoughton
2013-08-15
176
Winner of Chicago Tribune Heartland Prize for Fiction 2014 (UK) Short-listed for LA Times Book Prize for Fiction 2014 (UK)
Book picture is for illustrative purposes only, actual binding, cover or edition may vary.
This is a used book - there is no escaping the fact it has been read by someone else and it will show signs of wear and previous use. Overall we expect it to be in very good condition, but if you are not entirely satisfied please get in touch with us
Trustpilot