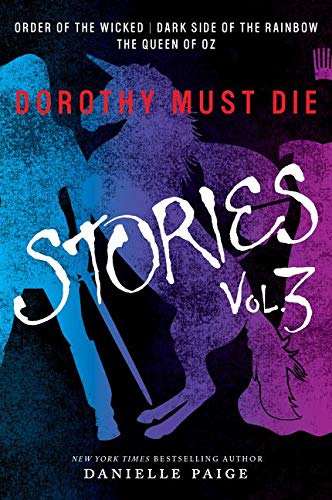 In this third collection of prequel novellas to the New York Times bestselling Dorothy Must Die series, Danielle Paige delivers a dark and compelling reimagining of L.

Dorothy Must Die Stories Volume 3: Order of the Wicked, Dark Side of the Rainbow, The Queen of Oz by Danielle Paige

In this third collection of prequel novellas to the New York Times bestselling Dorothy Must Die series, Danielle Paige delivers a dark and compelling reimagining of L. Frank Baum's The Wonderful Wizard of Oz, perfect for fans of Cinder by Marissa Meyer, Beastly by Alex Flinn, and Wicked by Gregory Maguire. Before Amy Gumm lands in Oz in Dorothy Must Die, Dorothy Gale rules a twisted land where the Good have become truly Wicked-and it's up to the Wicked to stop her reign. Follow your favorite witches from Dorothy Must Die as they form an elusive, secretive group known as the Revolutionary Order of the Wicked and begin training their own army to defeat Dorothy. If the Order wants to save Oz, they'll need every recruit they can find. But who has what it takes to join the cause?

Praise for the DOROTHY MUST DIE series: "Readers of Baum's books will take special delight in seeing new twists on the old characters, and they will greet the surprise climactic turnabout with the smugness of insiders." -- Kirkus Reviews "Dorothy Must Die is kind of the ultimate in girl-powered literature. Here, women and girls are allowed to be anything." -- Nerdist.com "Gone are the days of rainbows, Lollipop Guilds and pretty much anything to sing about in a major key. For those willing to go on a quest with a heroine more attuned to our times than the Dust Bowl era, there's no place like it." -- USA Today "Paige doesn't hold back in this fast-paced action novel. Give this cinematic upper-YA novel to fans of A. G. Howard's Splintered, Frank Beddor's Looking Glass Wars, and TV shows such as Once Upon a Time and Grimm." -- School Library Journal "Paige delivers a solid, intense, and strange narrative that draws deeply on its source material." -- Publishers Weekly "L. Frank Baum would be proud because Danielle Paige really makes Oz - even a modern, dystopian version of it - her own in the enjoyable sequel to Dorothy Must Die." -- USA Today "Paige is creating a rather brilliantly twisted version of the familiar world of Oz." -- Bulletin of the Center for Children's Books "Paige has embellished upon the original Wizard of Oz story to create a completely new, even more bizarre Oz and cast of characters. Her world building is fascinating." -- ALA Booklist "One wonder-filled volume. Paige continues to weave an intricate spell that will delight series fans." -- School Library Journal "For anyone who likes a good story turned on its head, Dorothy Must Die is a must-read." -- Huffington Post "The Wizard of Oz as you've never seen it." -- Teen Vogue "Paige's world building is intriguing and effectively augments the original world created by L. Frank Baum." -- ALA Booklist

Danielle Paige is a graduate of Columbia University and the author of the New York Times bestselling Dorothy Must Die series. Before turning to young adult literature, she worked in the television industry, where she received a Writers Guild of America Award and was nominated for several Daytime Emmys. She currently lives in New York City.

GOR009859380
Dorothy Must Die Stories Volume 3: Order of the Wicked, Dark Side of the Rainbow, The Queen of Oz by Danielle Paige
Danielle Paige
Dorothy Must Die Novella
Used - Very Good
Paperback
HarperCollins Publishers Inc
2017-06-09
288
0062423835
9780062423832
N/A
Book picture is for illustrative purposes only, actual binding, cover or edition may vary.
This is a used book - there is no escaping the fact it has been read by someone else and it will show signs of wear and previous use. Overall we expect it to be in very good condition, but if you are not entirely satisfied please get in touch with us.