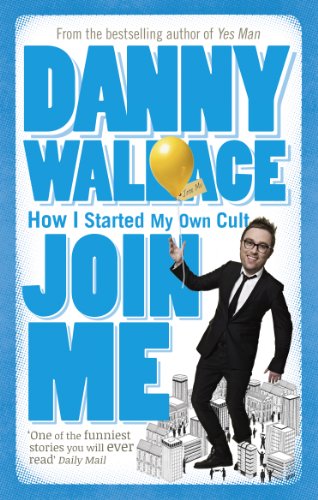 Join Me
by Danny Wallace

In Stock
$13.69
inc. GST
Within a month, he was receiving letters and emails from teachers, mechanics, sales reps, vicars, schoolchildren and pensioners - all pledging allegiance to his cause.
Very Good Good
Only 4 left

Join Me by Danny Wallace

Some men are born to lead. Others, not so much... Danny Wallace was bored. Just to see what would happen, he placed a whimsical ad in a local London paper. It said, simply, 'Join Me'. Within a month, he was receiving letters and emails from teachers, mechanics, sales reps, vicars, schoolchildren and pensioners - all pledging allegiance to his cause. But no one knew what his cause was. Soon he was proclaimed Leader. Increasingly obsessed and possibly power-crazed Danny risked losing his sanity and his loyal girlfriend. But who could deny the attraction of a global following of devoted joinees? A book about dreams, ambition and the responsibility that comes with power, Join Me is the true story of a man who created a cult by accident, and is proof that whilst some men were born to lead, others really haven't got a clue.

"One of the funniest stories you will ever read" * Daily Mail *
"The hilarious true story of a bunch of strangers being swept up in a bored man's experiment" * Heat *
"Hugely funny." * World Magazine *
"Join Me is the kind of book I love: effortlessly funny, painfully accurate and entertaining to the very end. Brilliant." -- Mike Gayle

Danny Wallace is a writer and television presenter, who wears glasses and used to have a cat. Join Me was his first solo book and was described as a 'word-of-mouth phenomenon' by The Bookseller and 'one of the funniest stories you will ever read' by the Daily Mail. His second book, Yes Man - in which he decided to say 'Yes' to everything has been made into a film starring Jim Carrey. It was described as 'hilarious' by more than four national newspapers, and Richard Madeley. Both books were Sunday Times bestsellers. Danny Wallace is PPA's Columnist of the Year 2011. Find out more about Danny at www.dannywallace.com.

GOR001236052
Join Me by Danny Wallace
Danny Wallace
Used - Very Good
Paperback
Ebury Publishing
2004-06-03
400
0091895820
9780091895822
N/A
Book picture is for illustrative purposes only, actual binding, cover or edition may vary.
This is a used book - there is no escaping the fact it has been read by someone else and it will show signs of wear and previous use. Overall we expect it to be in very good condition, but if you are not entirely satisfied please get in touch with us.