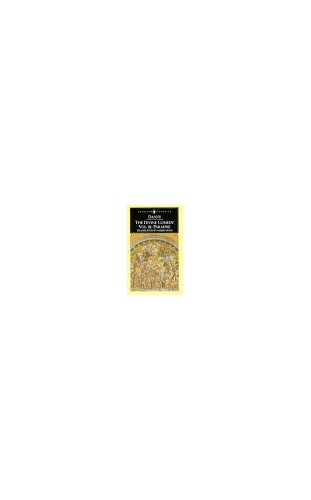 The Divine Comedy
by Dante Alighieri

In Stock
$18.49
inc. GST
Dante relates his mystical interpretation of the heavens, and his moment of transcendent glory, as he journeys, first with Beatrice, then alone, toward the Trinity. Including an interpretive commentary, a glossary and bibliography, this translation seeks to clarify the theological themes and make Dante accessible to the English-speaking public.
Very Good Good Well Read
8 in stock

The final volume in this brilliant translation destined to take its place among the great English versions of The Divine Comedy.

In his translation of Paradise, Mark Musa exhibits the same sensitivity to language and knowledge of translation that enabled his versions of Inferno and Purgatory to capture the vibrant power and full dramatic force of Dante's poetry. Dante relates his mystical interpretation of the heavens, and his moment of transcendent glory, as he journeys, first with Beatrice, then alone, toward the Trinity.

"Exactly what we have waited for these years, a Dante with clarity, eloquence, terror, and profoundly moving depths." -Robert Fagles, Princeton University

"A marvel of fidelity to the original, of sobriety, and truly, of inspired poetry." -Henri Peyre, Yale University

Dante Alighieri was born in Florence in 1265 and belonged to a noble but impoverished family. His life was divided by political duties and poetry, the most of famous of which was inspired by his meeting with Bice Portinari, whom he called Beatrice,including La Vita Nuova and The Divine Comedy. He died in Ravenna in 1321.

GOR001395200
The Divine Comedy: Paradise by Dante Alighieri
Dante Alighieri
Used - Very Good
Paperback
Penguin Books Ltd
1986-07-31
464
0140444432
9780140444438
N/A
Book picture is for illustrative purposes only, actual binding, cover or edition may vary.
This is a used book. We do our best to provide good quality books for you to read, but there is no escaping the fact that it has been owned and read by someone else previously. Therefore it will show signs of wear and may be an ex library book.