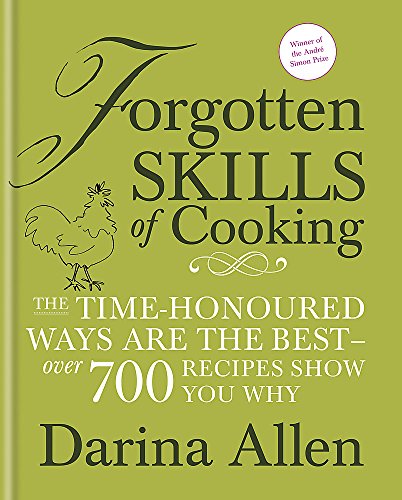 Used Price
$211.99
inc. GST
Free Shipping in Australia
A guide to traditional cookery skills with over 700 recipes. It includes chapters such as 'Dairy', 'Fish', 'Bread' and 'Preserving'. It explains processes such as smoking mackerel, curing bacon and making yogurt and butter. It also includes ideas for using forgotten cut of meat, baking bread and cakes and even eating food from the wild.
Reviews:
Trustpilot
Very Good

Darina Allen has won many awards such as the World Gourmand Cookbook Award 2018, the Award for Outstanding Contribution to the Irish Culinary Sector by Euro-Toques, the UK Guild of Food Writers Lifetime Achievement Award and the 2018 Guaranteed Irish Food Hero Award.

In this sizeable hardback, Darina Allen reconnects you with the cooking skills that missed a generation or two. The book is divided into chapters such as Dairy, Fish, Bread and Preserving, and forgotten processes such as smoking mackerel, curing bacon and making yogurt and butter are explained in the simplest terms. The delicious recipes show you how to use your home-made produce to its best, and include ideas for using forgotten cuts of meat, baking bread and cakes and even eating food from the wild. The Vegetables and Herbs chapter is stuffed with growing tips to satisfy even those with the smallest garden plot or window box, and there are plenty of suggestions for using gluts of vegetables. You'll even discover how to keep a few chickens in the garden. With over 700 recipes, this is the definitive modern guide to traditional cookery skills.

Darina Allen is Ireland's best-known food ambassador and the bestselling author of Ballymaloe Cookery Course and Forgotten Skills of Cooking, which won the prestigious Andre Simon award in 2009. She campaigns for local produce, is a member of Slow Food Ireland and set up Ireland's first farmers' market. She has won many awards including the Guild of Food Writers' Lifetime Achievement award in 2013. www.cookingisfun.ie

GOR003421967
Forgotten Skills of Cooking by Darina Allen
Darina Allen
Used - Very Good
Hardback
Octopus Publishing Group
2009-11-12
600
1856267881
9781856267885
Winner of Andre Simon Memorial Fund Award: Food 2009
Book picture is for illustrative purposes only, actual binding, cover or edition may vary.
This is a used book - there is no escaping the fact it has been read by someone else and it will show signs of wear and previous use. Overall we expect it to be in very good condition, but if you are not entirely satisfied please get in touch with us.