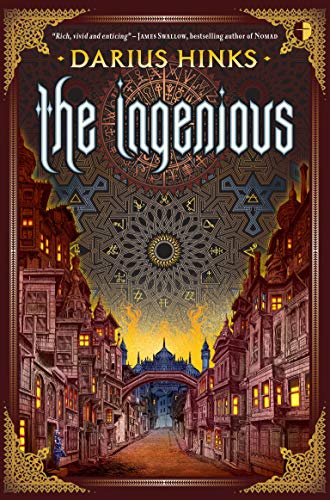 The Ingenious
by Darius Hinks

Used Price
$17.49
inc. GST
Free Shipping in Australia
Political exiles are desperate to escape from the impossible city that imprisons them, in this bloody and brilliant epic fantasy
Reviews:
Trustpilot
Very Good

The Ingenious by Darius Hinks

Thousands of years ago, the city of Athanor was set adrift in time and space by alchemists, called "the Curious Men". Ever since, it has accumulated cultures, citizens and species into a vast, unmappable metropolis.Isten and her gang of half-starved political exiles live off petty crime and gangland warfare in Athanor's seediest alleys. Though they dream of returning home to lead a glorious revolution, Isten's downward spiral drags them into a mire of addiction and violence. Isten must find a way to save the exiles and herself if they are ever to build a better, fairer world for the people of their distant homeland.File Under: Fantasy [ Alchymical Exiles | Loathing and Fear | Manifest Revelation | City of Broken Spheres ]

"A compelling and richly characterful first step into an awesome new world. Athanor is a hell of a place to get lost. I hope Darius hurries up with the sequel..."
"Visceral and intense, The Ingenious creates a world that is rich, vivid and enticing."
"A deftly woven fantasy, rich in imagination and narrative flare and wrought in lyrical prose. Not to be missed."
"Hinks's descriptions are intense, bordering on the grotesque"
"Its constantly changing nature gives it the sense of a wild, beautiful, protean place, its danger as seductive as it is horrifying."
"totally immersive"
"I'll be upfront: I loved The Ingenious."

DARIUS HINKS works and lives in Nottinghamshire, England. He spent the nineties playing guitar forthe grunge band, cable but when his music career ended in a bitter law suit, he turned to writing. His first novel, Warrior Priest, won the David Gemmell Morningstar award and, so far at least, none of his novels have resulted in litigation.

GOR009790644
The Ingenious by Darius Hinks
Darius Hinks
Used - Very Good
Paperback
Watkins Media
2019-02-05
349
0857667890
9780857667892
N/A
Book picture is for illustrative purposes only, actual binding, cover or edition may vary.
This is a used book - there is no escaping the fact it has been read by someone else and it will show signs of wear and previous use. Overall we expect it to be in very good condition, but if you are not entirely satisfied please get in touch with us.