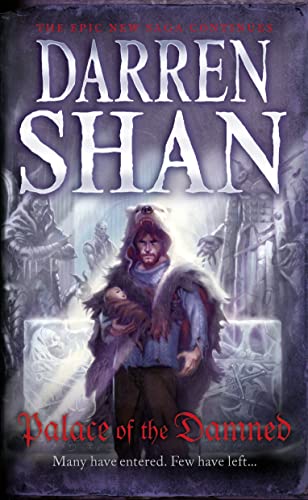 Palace of the Damned
by Darren Shan

Palace of the Damned Summary

Palace of the Damned (The Saga of Larten Crepsley, Book 3) by Darren Shan

Lost in the arctic waste, carrying a baby whose love he could never deserve, Larten faces the darkest time he has ever known.

But hope has a way of shining through even the smallest of cracks, and just as Larten reaches the end, a new beginning presents itself. The trouble is, for Larten, the violence of his youth is never far from the surface... and those he loves are the ones he hurts the most. As Larten experiences heaven and hell, and tries to save the soul of a child, the question is: can he save his own?

Palace of the Damned Reviews

"His writing is slick, his dialogue sharp and clever, his plotting immaculate. His books ooze with the kind of creepy, dark atmosphere and powerful characters that young teenage readers lap up. Shan is honing his craft with every book, and I look forward to the next gore-fest with relish."
Irish Independent

"Forget Stephen King, this author's the master of scaring children."
The Big Issue in Scotland

"A tantalising start to the series and a must-read for Darren Shan fans."
Books Quarterly

Darren Shan is the number-one best-selling author of the twelve book series THE SAGA OF DARREN SHAN, the ten book DEMONATA and more recently the SAGA OF LARTEN CREPSLEY. His books have been read by millions of people around the world and translated into more than 25 languages. Darren lives in seclusion in the depths of Ireland. He is a big film buff, and also loves theatre, comics and books, and collecting art. He loves dreaming up new ways to terrify his readers, but never drinks blood. Or so he claims.

GOR003243434
Palace of the Damned (The Saga of Larten Crepsley, Book 3) by Darren Shan
Darren Shan
The Saga of Larten Crepsley
Used - Very Good
Hardback
HarperCollins Publishers
2011-09-01
256
0007315910
9780007315918
N/A
Book picture is for illustrative purposes only, actual binding, cover or edition may vary.
This is a used book - there is no escaping the fact it has been read by someone else and it will show signs of wear and previous use. Overall we expect it to be in very good condition, but if you are not entirely satisfied please get in touch with us.