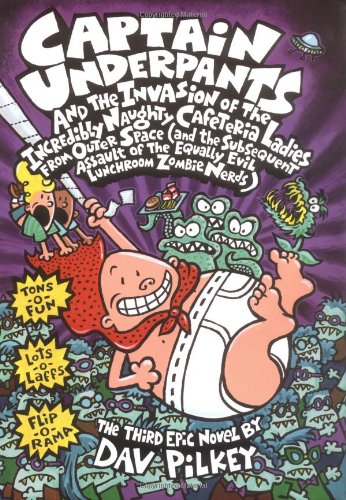 Out of Stock
$31.99
inc. GST
Only Captain Underpants can stop the three evil space aliens who have invaded Jerome Horwitz Elementary School and turned everyone into lunchroom zombie nerds.
Very Good
Only 0 left

George and Harold have played a trick or two on nearly everyone at Jerome Horwitz Elementary. When their latest prank causes the school's cranky cafeteria ladies to quit, Mr. Krupp hires a trio of unusual replacements -- who happen to look an awful lot like aliens! Will that curtain-caped crusader, Captain Underpants, save the day once more? Or will those outer-space cafeteria ladies have him for lunch?

The critics are CRAZY about UNDERPANTS!

"Call Pilkey... the savior of the 'reluctant reader.'" -- USA Today

"So appealing that youngsters won't notice that their vocabulary is stretching." --
School Library Journal

"Pilkey's sharp humor shines, and is as much fun for parents as their young readers."
-- Parents' Choice Foundation

"Combines empowerment and empathy with age-appropriate humor and action." --
Booklist

"Celebrates the triumph of the good-hearted." -- The Educational Book and Media
Association

As a child, Dav Pilkey was diagnosed with dyslexia and ADHD. Dav was so disruptive in class that his teachers made him sit out in the hall every day. Luckily, Dav loved to draw and make up stories, so he spent his time in the hallway creating his own original comic books.

In the second grade, Dav Pilkey created a comic book about a superhero named Captain Underpants. His teacher ripped it up and told him he couldn't spend the rest of his life making silly books. Fortunately, Dav was not a very good listener.

Dav has gone on to create award-winning and bestselling books for children. His Captain Underpants series has more than 80 million copies in print worldwide and has been translated into more than 28 languages. In 2017, DreamWorks Animation brought the character to the silver screen in the feature film adaptation Captain Underpants: The First Epic Movie, and Netflix is now streaming The Epic Tales of Captain Underpants TV show.

Dav's latest creation, Dog Man, continues to be a #1 New York Times bestselling series with more than 13 million copies in print worldwide and translations available in more than 21 languages. Dav is also the creator of the Dragon series, the Dumb Bunnies series, Dog Breath, and The Paperboy, which is a Caldecott Honor Book.

Dav lives in the Pacific Northwest with his wife.

GOR005339288
Captain Underpants and the Invasion of the Incredibly Naughty Cafeteria Ladies from Outer Space by Dav Pilkey
Dav Pilkey
Captain Underpants
Used - Very Good
Hardback
Scholastic US
1999-09-01
134
0439049954
9780439049955
N/A
Book picture is for illustrative purposes only, actual binding, cover or edition may vary.
This is a used book - there is no escaping the fact it has been read by someone else and it will show signs of wear and previous use. Overall we expect it to be in very good condition, but if you are not entirely satisfied please get in touch with us.