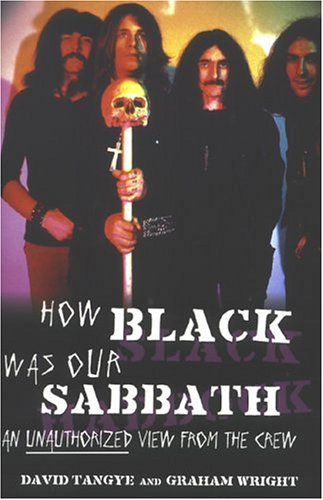 How Black Was Our Sabbath
by Dave Tangye

In Stock
$16.99
+10% GST
An outrageous, insiders' account of life on the road with Black Sabbath.
Very Good
Only 3 left

How Black Was Our Sabbath Summary

How Black Was Our Sabbath: An Unauthorised View From The Crew by Dave Tangye

Black Sabbath are the ultimate heavy rock band. They have sold millions of albums worldwide, with ardent fans across the globe. Dave Tangye and Graham Wright were in the crew during the seventies, the band's heyday, and have the stories to prove it. For the first time they cover in detail the early days of the group, including a certain gig in the Scottish borders, where they were almost beaten up by the local farmers. As the Sabs rose to fame and notoriety, touring Europe, Australia and America, delighting fans and disgusting law-abiding members of the public, incidents of bad behaviour stack up alarmingly. Many focus on Ozzy Osbourne, from his obsession with guns and shooting things, which led to his country house being christened Atrocity Cottage, to his amazing capacity for alcohol.

Full of new information, HOW BLACK WAS OUR SABBATH is a real Spinal Tap story, a warm, funny, poignant tribute to four mates from Birmingham who became the biggest heavy rock band in the world.

Dave Tangye was Ozzy's assistant throughout the seventies, and Graham Wright was assistant to drummer Bill Ward.

GOR001948731
How Black Was Our Sabbath: An Unauthorised View From The Crew by Dave Tangye
Dave Tangye
Used - Very Good
Hardback
Pan Macmillan
2004-03-05
256
0283073683
9780283073687
N/A
Book picture is for illustrative purposes only, actual binding, cover or edition may vary.
This is a used book - there is no escaping the fact it has been read by someone else and it will show signs of wear and previous use. Overall we expect it to be in very good condition, but if you are not entirely satisfied please get in touch with us.