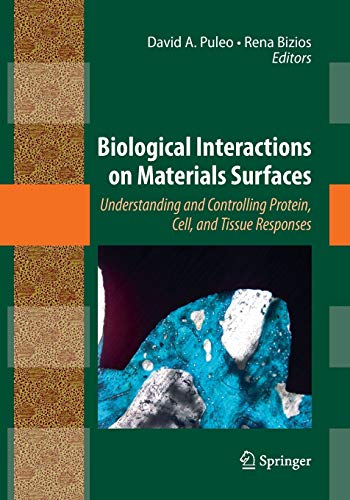 Biological Interactions on Materials Surfaces by David A. Puleo

Success or failure of biomaterials, whether tissue engineered constructs, joint and dental implants, vascular grafts, or heart valves, depends on molecular-level events that determine subsequent responses of cells and tissues.

Success or failure of biomaterials, whether tissue engineered constructs, joint and dental implants, vascular grafts, or heart valves, depends on molecular-level events that determine subsequent responses of cells and tissues. This book presents the latest developments and state-of-the-art knowledge regarding protein, cell, and tissue interactions with both conventional and nanophase materials. Insight into these biomaterial surface interactions will play a critical role in further developments in fields such as tissue engineering, regenerative medicine, and biocompatibility of implanted materials and devices. With chapters written by leaders in their respective fields, this compendium will be the authoritative source of information for scientists, engineers, and medical researchers seeking not only to understand but also to control tissue-biomaterial interactions.

Her research interests include cellular and tissue engineering, tissue regeneration, biomaterials (including nanostructured ones) and biocompatibility. She has co-authored a textbook (entitled An Introduction to Tissue-Biomaterial Interactions) and authored/co-authored over 95 scientific publications and book chapters. She has given numerous presentations at scientific conferences and invited seminars/lectures in academic institutions and industry. She has also organized and/or co-chaired numerous symposia and sessions at national/international conferences.

Dr. Bizios is a member of many professional societies. She has been an active participant (including elected officer positions) in the Society for Biomaterials, the Biomedical Engineering Society, and the American Institute of Chemical Engineers. She is a member of the editorial board of the Journal of Biomedical Materials Research. She has participated in various (and chaired some) NIH Study Sections, NSF Review Panels, and similar national-level review committees. She has also served on numerous departmental, School/College of Engineering and Institute/University committees at Rensselaer and now at UTSA.

Dr. Bizios received the Outstanding Alumna in Engineering Award of the Society of Women Engineers, College of Engineering, University of Massachusetts, Amherst, MA (1985), the Rensselaer Alumni Association Teaching Award, Rensselaer Polytechnic Institute (1997), and the Clemson Award for Contributions to the Scientific Literature of Biomaterials from the Society for Biomaterials (1998). She was Jubileums Professor at Chalmers University of Technology, Goeteborg, Sweden (fall of 2002), Chercheur Associe (spring of 2003) and Directeur de Recherche Associe, Centre National de la Recherche Scientifique, Faculte de Medicine Saint-Louis Lariboisiere, Universite Paris VII, Paris, France (fall of 2005). She is Fellow of the American Institute for Medical and Biological Engineering (AIMBE), International Fellow of Biomaterials Science and Engineering of the International Union of Societies for Biomaterials Sciences and Engineering, and Fellow of the Society of Biomedical Engineering (BMES).

David A. Puleo received B.S. and Ph.D. degrees in Biomedical Engineering from Rensselaer Polytechnic Institute. In 1991, he joined the University of Kentucky as a junior faculty member to establish a track in biomaterials in the Center for Biomedical Engineering. In addition to being promoted through the ranks to Professor, he served as Director of Graduate Studies and currently is Director of the Center, overseeing all administrative and educational matters. He also holds an appointment in the Center for Oral Health Research in the College of Dentistry. Dr. Puleo has developed and teaches courses ranging from introductory biomaterials to advanced offerings on events at the tissue-implant interface. He has taught undergraduates, graduates, orthopedic surgery residents, and post-graduate dental students.

Dr. Puleo's research interests focus on applying understanding of cell-biomaterial interactions to develop materials and surface modification strategies for the purpose of manipulating cellular responses at the tissue-implant interface. He is active in a variety of professional organizations, including the Society For Biomaterials, Biomedical Engineering Society, and the International and American Associations for Dental Research. He is an Assistant Editor for the Journal of Biomedical Materials Research Part B (Applied Biomaterials) and on the editorial board of Journal of Biomedical Materials Research Part A. He has served on and chaired numerous review panels centered on biomaterials and tissue engineering at NIH and NSF and has reviewed for several other domestic and foreign organizations. Dr. Puleo received a Research Initiation Award from the National Science Foundation, was awarded the Bourses de stage de recherche scientifique of the Programme quebecois de bourses d'excellence administered through the Ministere de l'Education of the Gouvernement du Quebec. He is also coauthor of Introduction to Tissue-Biomaterial Interactions, a textbook written specifically for undergraduates and first semester graduate students transitioning into the field of biomaterials