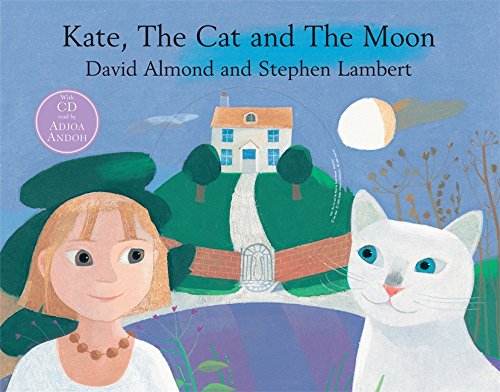 Kate, The Cat and The Moon
by David Almond

Kate, The Cat and The Moon Summary

Kate, The Cat and The Moon by David Almond

'Once, in a shining night, while the moon looked down and the stars glittered in the endless sky, and all the house was lost in dreams... the little girl woke and heard a cat. "Miaow," called the cat. "Miaow."'

David Almond is known for his subtle and intelligent imagination. This, his first picture book, demonstrates his brilliance as a storyteller - as he weaves together the dreams of Kate, the girl and her family... on a single night of magic with spellbinding illustrations by Stephen Lambert.

Customer Reviews - Kate, The Cat and The Moon

Kate, The Cat and The Moon Reviews

Younger readers will be held in thrall. * Scottish Sunday Herald *
David Almond's poetic text...provides a background for imaginations to soar. A book for bedtime that entertains through wonder rather than high drma is an unusual treat; this is one to savour. * The Guardian *
New and imaginative. * The Sunday Times *
Beautifully constructed and eminently re-readable. * Scottish Sunday Herald *
A poetic text made of the stuff of dreams. * The Children's Bookseller *
A book that will appeal to every child who has longed to run wild. * The Observer *

ON KATE, THE CAT AND THE MOON:
1Children's Book of the Week - Sunday Times
2 '... new and imaginative...' - Culture Section, The Sunday Times
3'David Almond's poetic text barely tells a story; instead it provides a background for imaginations to soar. The dreamy world that he creates for Kate and the Cat to explore is made real in Stephen Lambert's painterly illustrations.' - Julia Eccleshare, The Guardian
4 '...one to savour.' - Julia Eccleshare, The Guardian

' Seldom are we lucky enough to find a picture book which explores the night, dreams and magical transformations in quite such a satisfying way as this one... It will be apparent that this is a complex and challenging picture book, but one that will repay many readings. Stephen's Lambert's illustrations are superb and full of life. * The School Librarian *
One of the best of this year's new picture books. * The Irish Times *

5 David Almond is a fine writer, one of the very finest we have. He is simply incapable of writing a bad sentence. In THE FIRE-EATERS, his sense of place is unerring. Michael Morpurgo, Financial Times Magazine
6 David Almond's The Fire-Eaters is an exceptional novel. - Lesley Agnew, The Bookseller
7 'Once in a while a book comes along that takes over your head and your heart. David Almond's The Fire-Eaters is such a book ... The writing is lyrical and atmospheric and establishes a strong sense of place.' - Wendy Cooling, The Bookseller
8 'Almond makes familiar issues fresh; his characters are finely drawn and his depiction of place perfectly realised.' - Julia Eccleshare, The Guardian
9 SKELLIG: 'Gripping, beautifully and brilliantly written. Everyone is raving about this unforgettable book.' - The Sunday Times
10 KIT'S WILDERNESS: '...this superb piece of lyrically-written literary fiction captivates children and their parents alike.' - The Guardian
11 HEAVEN EYES: 'David Almond understands the joy and fear of being alive better than most - Heaven Eyes is a mysterious gift of a novel.' - The Times
12 SECRET HEART: 'This gripping book will enrich your soul and fire your imagination.' - The Daily Telegraph

With words that move as smoothly as a cat in the night, this perfect, poetic picture book will stroke a child's imagination until it purrs. * Child Education *
Like the best picture books, it reads like poetry. Lambert's illustrations complement the lyrical trance-like state. * the Glasgow Herald *
Will leave young readers spellbound. * Books For Keeps *
Action floats freely . . . Words and images are in a poetic and mesmeric partnership. * TES Teacher *
A moonlit world of adventures . . . younger readers will enjoy exploring the scene. * Junior News and Mail *
...beguiling text... inspired illustrations. * Publishing News *
'David Almond's first picture book Kate, the Cat and the Moon has a poetic text made of the stuff of dreams, given magical shape and solidity in Stephen Lambert's artwork.' * The Children's Bookseller *
"...has a poetic text made the stuff of dreams, given magical shape and solidarity in Stephen Lambert's artwork" - The Bookseller * Bookseller *
'Almond's simple, almost incantatory prose is beautifully illustrated by Stephen Lambert, whose landscapes are reminiscent of Hockney. A book for every child who has longed for the freedom to run wild.' * the observer *

David Almond is the author of Skellig, My Name is Mina, Counting Stars, The Savage, Island, A Song for Ella Grey, The Colour of the Sun and many other novels, stories, picture books, opera librettos, songs and plays. His work is translated into 40 languages, and is widely adapted for stage and screen. His major awards include the Carnegie Medal, two Whitbread Awards, the Eleanor Farjeon Award, the Michael L Printz Award (USA), Le Prix Sorcieres (France) and the Guardian Children's Fiction Prize. In 2010 he won the Hans Christian Andersen Award, the world's most prestigious prize for children's authors. David speaks at festivals and conferences around the world. He is Professor of Creative Writing at Bath Spa University. He is widely regarded as one of the most exciting, inspirational and innovative children's authors writing today. He has one amazing daughter. He lives in Bath and in Newcastle, the city in which he was born. www.davidalmond.com Stephen grew up in Reigate, Surrey and has lived in London, North Yorkshire and currently resides on the edge of Bodmin Moor in Cornwall. After attending Reigate College of Art and Lincoln College of Art, Stephen eventually found himself illustrating for a living. For Orchard, Stephen has illustrated The Orchard book of Egyptian Gods and Pharaohs, written by Robert Swindells (July 2003). This is a collection of spellbinding stories from Egyptian mythology and Stephen's stunning illustrations vividly bring to life the drama of this era. "A magical title which blends a tremendously strong storyline with the soft tonalities and dreamlike intensity of Stephen Lambert's dramatic artwork." The Bookseller "Stephen Lambert's illustrations capture very well both the colours of the desert landscape and the slightly ponderous mystery that hovers over the tales." Times Education Supplement Stephen's other books include Nobody Rides the Unicorn (Transworld) which has been shortlisted for the Smarties Award, The Train Ride (Walker Books) and The Secret in the Mist (Gullane). When Stephen is not accompanying his dog on walks along the Cornish coastal paths, he is learning to cultivate his garden.

GOR001287202
Kate, The Cat and The Moon by David Almond
David Almond
Used - Very Good
Paperback
Hachette Children's Group
2005-09-15
32
0340773871
9780340773871
N/A
Book picture is for illustrative purposes only, actual binding, cover or edition may vary.
This is a used book - there is no escaping the fact it has been read by someone else and it will show signs of wear and previous use. Overall we expect it to be in very good condition, but if you are not entirely satisfied please get in touch with us.