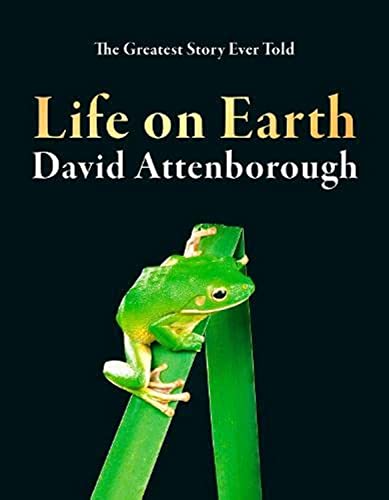 Life on Earth
by David Attenborough

Life on Earth by David Attenborough

David Attenborough's unforgettable meeting with gorillas became an iconic moment for millions of television viewers. Life on Earth, the series and accompanying book, fundamentally changed the way we view and interact with the natural world setting a new benchmark of quality, influencing a generation of nature lovers.

Told through an examination of animal and plant life, this is an astonishing celebration of the evolution of life on earth, with a cast of characters drawn from the whole range of organisms that have ever lived on this planet. Attenborough's perceptive, dynamic approach to the evolution of millions of species of living organisms takes the reader on an unforgettable journey of discovery from the very first spark of life to the blue and green wonder we know today.

Now, to celebrate the 40th anniversary of the book's first publication, David Attenborough has revisited Life on Earth, completely updating and adding to the original text, taking account of modern scientific discoveries from around the globe. He has chosen beautiful, completely new photography, helping to illustrate the book in a much greater way than was possible forty years ago.

This special anniversary edition provides a fitting tribute to an enduring wildlife classic, destined to enthral the generation who saw it when first published and bring it alive for a whole new generation.

`It does not disappoint. The new Life on Earth is as glorious as the first'
Guardian

`A beautiful and wide ranging work. The breadth of natural history covered is extraordinary and mesmerising. Life on Earth is still breathtakingly rich, and we would know far less about it were it not for Attenborough's wonderful skills of communication over the years: our cultural and scientific lives would be poorer without him'
New Scientist

David Attenborough is one of the world's leading naturalists and broadcasters. His distinguished career spans more than sixty years, and his extraordinary contribution to natural history broadcasting and film-making has brought him international recognition, from Life on Earth to Frozen Planet, Planet Earth to Blue Planet. He has achieved many professional awards, honours and merits, including the CBE and OM, and was knighted in 1985.

GOR009428702
Life on Earth by David Attenborough
David Attenborough
Used - Very Good
Hardback
HarperCollins Publishers
2018-10-04
352
0008294283
9780008294281
N/A
Book picture is for illustrative purposes only, actual binding, cover or edition may vary.
This is a used book - there is no escaping the fact it has been read by someone else and it will show signs of wear and previous use. Overall we expect it to be in very good condition, but if you are not entirely satisfied please get in touch with us.