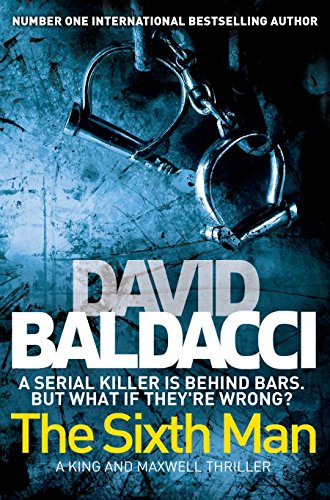 The Sixth Man
by David Baldacci

In Stock
$11.49
+10% GST
A heart-racing thriller from the Number One International Bestselling Author
Very Good Good
9 in stock

The Sixth Man by David Baldacci

The fifth book in the heart-stopping King and Maxwell series, The Sixth Man by David Baldacci will keep pulses racing as Sean King and Michelle Maxwell face their greatest challenge yet.

When alleged serial killer Edgar Roy is locked away in Cutter's Rock psychiatric unit, private investigators Sean King and Michelle Maxwell are called in by Roy's lawyer, Ted Bergin, to examine the case further. But the investigation is derailed before it begins when Bergin is found murdered in his car on the highway.

A sinister trail of terrifying events begins to unfold as King and Maxwell attempt to determine Roy's guilt or innocence. When the FBI becomes involved, it fast becomes apparent that there's much more to this case than meets the eye. As they dig deeper into Roy's past and learn about his phenomenal ability, they are bombarded with obstacles, half-truths, and dead ends which make filtering the facts all the more difficult.

As each new theory brings a new revelation, King and Maxwell are pushed to the limit. Could this be the case which leaves the duo permanently parted?

GOR003240999
The Sixth Man by David Baldacci
David Baldacci
King and Maxwell
Used - Very Good
Paperback
Pan Macmillan
2011-11-04
608
033052030X
9780330520300
N/A
Book picture is for illustrative purposes only, actual binding, cover or edition may vary.
This is a used book - there is no escaping the fact it has been read by someone else and it will show signs of wear and previous use. Overall we expect it to be in very good condition, but if you are not entirely satisfied please get in touch with us.