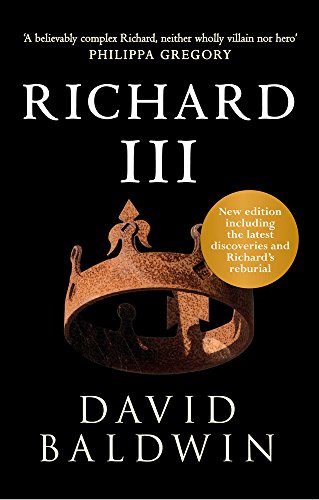 Used Price
$14.49
inc. GST
Free Shipping in Australia
New edition of the bestselling biography of the controversial king whose bones were discovered in a car park in 2012. Contains NEW material, including an account of the reburial in March 2015.
Reviews:
Trustpilot
Like New Very Good

Not many people would claim to be saints, or alternatively, consider themselves entirely without redeeming qualities. Some are unquestionably worse than others, but few have been held in greater infamy than Richard Plantagenet, afterwards Duke of Gloucester and, later still, King Richard III. Richard's character has been besmirched as often as it has been defended, and the arguments between his detractors and supporters still rage after several centuries. Was he a ruthless hunchback who butchered his way to the throne, a paragon of virtue who became a victim of Tudor propaganda, or (as seems more likely) something in between? Some would argue that a true biography is impossible because the letters and other personal documents required for this purpose are simply not available; but David Baldwin has overcome this through an in-depth study of Richard's dealings with his contemporaries and of information gleaned from the recent discovery of his skeleton. Tracking Richard's journey from birth to death, this new edition is brought right up to date with an exploration of the latest scientific discoveries and an account of the king's reburial in Leicester Cathedral. The fundamental question David Baldwin has answered is `what was Richard III really like'.

David Baldwin was a medieval historian who taught at the Universities of Leicester and Nottingham for many years. His historical research focused on the great medieval families in the Midlands and he had contributed articles to historical journals and lectured regularly to societies and conferences in this field. Sadly he passed away in 2016.

GOR010863622
Richard III by David Baldwin
David Baldwin
Used - Like New
Paperback
Amberley Publishing
2015-04-01
288
1445648458
9781445648453
N/A
Book picture is for illustrative purposes only, actual binding, cover or edition may vary.
The book has been read, but looks new. The book cover has no visible wear, and the dust jacket is included if applicable. No missing or damaged pages, no tears, possible very minimal creasing, no underlining or highlighting of text, and no writing in the margins.