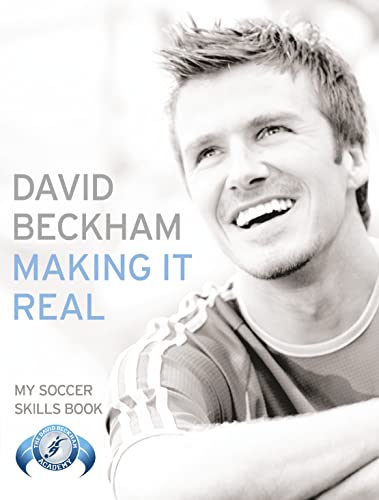 Making It Real
by David Beckham

Featuring state-of-the-art soccer skills training tips, the story behind the David Beckham academies, and with insights from Beckham on his unique lifestyle, this book captures the essence of what it's like to be England football captain and one of the most celebrated faces on the planet.

Making It Real: My Soccer Skills Book by David Beckham

Featuring state-of-the-art soccer skills training tips, the story behind the David Beckham academies, and with insights from Beckham on his unique lifestyle, this book captures the essence of what it's like to be England football captain and one of the most celebrated faces on the planet.

Boys and girls aged 8-15 will be able to participate in a five-day soccer programme run during key times in the year, with unique cross-curricular activities focusing on football, team building, diet and nutrition, health and fitness, physiology and the role of managers and the media.

This book is the realisation of Beckham's dream to give something back to the sport that made him a legend. It will feature a complete football training programme - from basic control skills and anticipation through to crossing techniques, free-kicks, and tactical awareness - based on the coursework within the Academy. Crucially, it will also address the life skills which form a core element of the workshops, ensuring that readers come away with not just an appreciation of the sport and world-class coaching techniques but how personal development forms a key role in their lives.

Lavishly illustrated with exclusive photographs of Beckham on and off the field, and with his own insights into his upbringing and how his experiences have shaped his career in the game, this book represents the next big adventure for Beckham - and the creation of an exciting, modern learning facility for any young aspiring footballer regardless of ability. The dream is now a reality.

`I wanted an environment where children could learn but more importantly have fun. I hope that this will be a unique experience for many kids and one that will stay with them for the rest of their lives' David Beckham

David Beckham was born in Leytonstone, East London in May 1975. At the age of 11 he came first in the Bobby Charlton Soccer Schools competition ahead of 5,000 other boys. He signed for Manchester United in 1989 and made his debut three years later, aged 17. He has since gone on to play almost a hundred times for England, including captaining his country for both the 2002 and 2006 World Cup Finals. He was transfered to Real Madrid for GBP25 million in the summer of 2003.
Leo Moynihan is a football journalist for publications such as FourFourTwo, Observer Sports Monthly and Sunday Telegraph. He was nominated for Best New Writer in the 2005 British Sports Book of the Year awards for his biography of Gordon Strachan.

GOR001409209
Making It Real: My Soccer Skills Book by David Beckham
David Beckham
Used - Very Good
Paperback
HarperCollins Publishers
2006-09-18
160
000723418X
9780007234189
N/A
Book picture is for illustrative purposes only, actual binding, cover or edition may vary.
This is a used book - there is no escaping the fact it has been read by someone else and it will show signs of wear and previous use. Overall we expect it to be in very good condition, but if you are not entirely satisfied please get in touch with us.