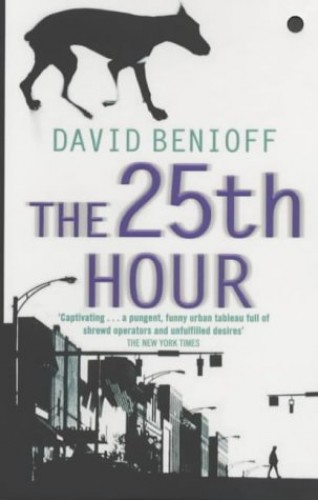 The 25th Hour
by David Benioff

In Stock
$16.99
+10% GST
From the co-creator of the HBO series Game of Thrones and the Sunday Times bestselling author of CITY OF THIEVES, this character-driven crime novel is a spellbinding portrait of three friends confronting the consequences of their carefree youth on the streets of New York.
Very Good Good Well Read
7 in stock

The 25th Hour by David Benioff

From the writer of the award-winning Game of Thrones series for HBO based on the books of George R. R. Martin.

His father wants him to run. His drug-lord boss, Uncle Blue, wants to know if he squealed. His girlfriend isn't sure what she wants, and his two best friends know one thing for sure; after he goes in, he will never be the same.

'As unusual as it is well wrought: it resonates with a Whitmanesque sense of the city's possibilities and unsatisfied longings' New Yorker

This character-driven crime novel is a spellbinding portrait of three friends confronting the consequences of their carefree youth on the streets of New York. * From the Publisher's Description *
Acerbically captivating first novel . . . Benioff creates a pungent, funny urban tableau full of shrewd operators and unfulfilled desires * New York Times *
As unusual as it is well wrought: it resonates with a Whitmanesque sense of the city's possibilities and unsatisfied longings * New Yorker *
David Benioff's headlong suspense novel is a deceptively simple chronicle of [Monty's] final day of freedom . . . Working in a novelistic form of "real time", Benioff shows a knack for critiquing his genre while revitalising its cliches . . . Instead of yielding mere irony, the author, in his first novel, achieves both pathos and excitement * Entertainment Weekly *
Brilliantly conceived, this gripping crime drama boasts dead-on dialogue, chiaroscuro portraits of New York's social strata and an inescapable crescendo of tension. Monty's solution to his agonising dilemmas will shock even hardened suspense lovers * Publishers Weekly *

David Benioff is the co-creator of the worldwide massive hit HBO TV series Game of Thrones, based on the books from George R.R. Martin's A Song of Ice and Fire series. He is also the writer of the screenplays for the films Troy, Stay, X-Men Origins: Wolverine and The Kite Runner. He adapted his first novel, The 25th Hour, into the screenplay for Spike Lee's popular feature film of the same name. His historical fiction novel City of Thieves and short story collection When the Nines Rolled Over received critical acclaim. He lives in Los Angeles and New York City.

GOR001413542
The 25th Hour by David Benioff
David Benioff
Used - Very Good
Paperback
Hodder & Stoughton General Division
2002-05-16
288
0340822295
9780340822296
Short-listed for CWA John Creasey Memorial Award 2002
Book picture is for illustrative purposes only, actual binding, cover or edition may vary.
This is a used book - there is no escaping the fact it has been read by someone else and it will show signs of wear and previous use. Overall we expect it to be in very good condition, but if you are not entirely satisfied please get in touch with us.