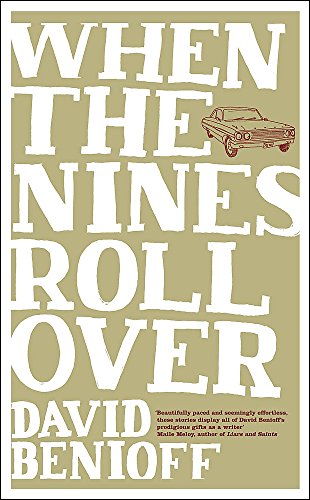 When the Nines Roll Over by David Benioff

'A deeply satisfying collection of unusual, resonant and beautifully composed stories. David Benioff is one of the most promising writers of his generation' - George Pelecanos

When the Nines Roll Over by David Benioff

The witty, deftly crafted and poignant stories in this collection explore the sometimes thrilling, sometimes pathetic emotional lives of a diverse set of characters. Over the course of eight tales, often with an appealing touch of the surreal, we are introduced to a record company exec searching for a rock star, an inexperienced Russian soldier trapped between his murderous colleagues and a clever old woman, a faded football star recalling his lost chance at love, an actress who has a shot at a role that will free her from a lifetime of waitressing, a young man who kidnaps his ex-girlfriend's father's ashes, and other young people on the cusp of discovery, jubilation or loss.

As he evokes the various states of agony and pleasure - humiliation, rebellion, cameraderie, and desire - Benioff displays a profound understanding of how single moments lead to transformation, and how sadness can be illuminated by a humorous flip side.

'Over the course of these eight tales, Benioff, author of the critically-acclaimed novel The 25th Hour, demonstrates a cool mastery of the short story genre. ...

In his slick prose, which resonates with humour and compassion and jumps from stark reality to offbeat surrealism, Benioff shows how single moments can transform a life. Gripping'

* Heat Magazine *
'A deeply satisfying collection of unusual, resonant and beautifully composed stories. David Benioff is one of the most promising writers of his generation' * George Pelecanos on When the Nines Roll Over *
David Benioff was born and raised in New York City. He adapted his first novel, THE 25TH HOUR, into the screenplay for Spike Lee's film of the same name. He is also the author of the screenplays for the films Troy and the forthcoming Stay, Wolverine and The Kite Runner. Stories from WHEN THE NINES ROLL OVER have appeared in Best New American Voices and The Best Nonrequired American Reading. He lives in Los Angeles, where he is at work on his next novel.
GOR001570984
9780340897027
0340897023
When the Nines Roll Over by David Benioff
David Benioff
Used - Very Good
Hardback
Hodder & Stoughton General Division
2005-07-18
240
N/A
Book picture is for illustrative purposes only, actual binding, cover or edition may vary.
This is a used book - there is no escaping the fact it has been read by someone else and it will show signs of wear and previous use. Overall we expect it to be in very good condition, but if you are not entirely satisfied please get in touch with us
Trustpilot