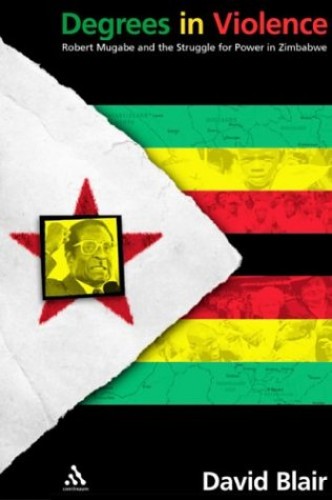 Degrees in Violence
by David Blair

Used Price
$23.49
inc. GST
Free Shipping in Australia
Once renowned for the racial reconciliation on its independence, Zimbabwe has become condemned for its violence and political turmoil. This is the story of Zimbabwe from the hopeful era of new independence to the petrol queues, food riots and terror campaign waged by Mugabe supporters.
Reviews:
Trustpilot
Very Good

Degrees in Violence: Robert Mugabe and the Struggle for Power in Zimbabwe by David Blair

Robert Mugabe is a unique figure among African leaders. Having led the struggle against colonial rule, he has held office uninterruptedly since independence. Now, after 21 years of dominance, Mugabe is waging a bitter struggle to hold power against an opposition born from the spiralling economic and social collapse of Zimbabwe. David Blair, The Foreign Press Association Young Journalist of the Year, was forced to leave Zimbabwe in June 2001 as Robert Mugabe's government sought to silence the media. He left a country in turmoil, gripped by a ferocious battle for power. This book tells the story of Zimbabwe from the hopeful era of new independence to the present reality of petrol queues, food riots and a terror campaign waged by Mugabe supporters. From white farmers who live as if the colonial rule had never ended, to a paraniod government and its often inept oppostion, Blair exposes the incompetence and folly that have led to the crisis in Zimbabwe.

"[A] valuable addition to the post-colonial African library... [Blair] is able to put flesh on ludicrous but extremely dangerous characters...Blair's book is the vibrant storytalling of a newspaper journalist who finds himself in the middle of an astonishing story."
"A dramatic eyewitness account of the recent land invasions.... timely...riveting on the last three years of mayhem...a superb chronicle of a campaign during which laws of land ownership were torn up and distinguished judges openly defied."

David Blair was Zimbabwe correspondent of the Daily Telegraph before being forced to leave by the Mugabe government in June 2001. Winner of the 2001 Young Journalist of the Year award.

GOR003588276
Degrees in Violence: Robert Mugabe and the Struggle for Power in Zimbabwe by David Blair
David Blair
Used - Very Good
Hardback
Bloomsbury Publishing PLC
2002-03-07
120
0826459749
9780826459749
N/A
Book picture is for illustrative purposes only, actual binding, cover or edition may vary.
This is a used book - there is no escaping the fact it has been read by someone else and it will show signs of wear and previous use. Overall we expect it to be in very good condition, but if you are not entirely satisfied please get in touch with us.