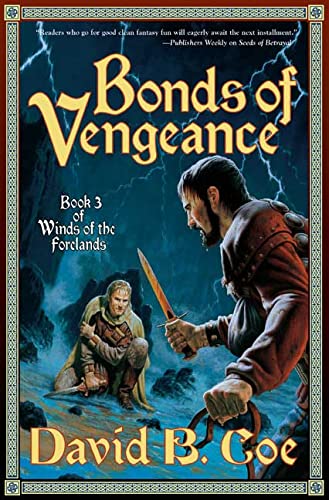 Bonds of Vegeance
by David Coe

In Stock
$36.99
inc. GST
When civil unrest among the magical Qirsi people and their Eandi overlords threatens to tear apart the fabric of Forelands society, Qirsi gleaner Grinsa and his sister, the archminister Keziah, travel with the vengeful Lord Tavis of Curgh in the hopes of preventing a war.
Very Good
Only 1 left

Bonds of Vegeance: Book 3 of Winds of the Forelands by David Coe

For nine hundred years the Forelands knew peace, but unrest among the magical Qirsi people has blossomed into a conspiracy against the Eandi rulers. What started with an occasional "accidental" death of a lord has exploded into violence, rending the fabric of Forelands society. Led by a mysterious Qirsi "Weaver" with powers that can reach into the minds of others even in their sleep, the rebellion is now turning Qirsi against Qirsi, as it weakens alliances among the Eandi.
Some Qirsi ministers are torn between plotting to overthrow the Eandi and staying loyal to their lords; others have been ready for a rebellion for a long time and are active in the burgeoning and increasingly violent rebellion. Even some Qirsi who oppose the rebellion are forced to take sides against their lords, while an Eandi lord in league with the conspiracy prepares for war against rival houses.
Yet as the world tilts toward terrible upheaval, some stand firm against the chaos. Grinsa, a Qirsi gleaner, is trying to head off the war he knows would spell disaster for his own people as well as the Eandi. Traveling with Lord Tavis of Curgh as the young noble seeks revenge on the assassin who killed his betrothed and thus set the chaos in motion, Grinsa may be the only person who can stop the Weaver from shattering the long peace. But even Grinsa can't do it alone. His sister, Keziah, archminister to King Kearney, himself a staunch advocate of peace, works to prevent war, too. They may be too late, though, as realms plunge toward war, goaded by traitors within their gates.

"Strong, complex, and emotionally very, very powerful."
--Sara Douglass, author of "The Wayfarer Redemption," on "Bonds of Vengeance"
"The notion of a charismatic leader who directs his followers by "turning" them to his will via dream telepathy gives this series an evocative edge . . ."
--"Publishers Weekly" on "Bonds of Vengeance"

David B. Coe, winner of the William L. Crawford Award for Best First Fantasy or Fantasy Series for the LonTobyn Chronicle, is the author of "Rules of Ascension" and "Seeds of Betrayal," the first two Winds of the Forelands novels. He lives in Sewanee, Tennessee with his wife and daughters.

GOR008067940
Bonds of Vegeance: Book 3 of Winds of the Forelands by David Coe
David Coe
Used - Very Good
Hardback
St Martin's Press
2005-02-01
415
0312878095
9780312878092
N/A
Book picture is for illustrative purposes only, actual binding, cover or edition may vary.
This is a used book - there is no escaping the fact it has been read by someone else and it will show signs of wear and previous use. Overall we expect it to be in very good condition, but if you are not entirely satisfied please get in touch with us.