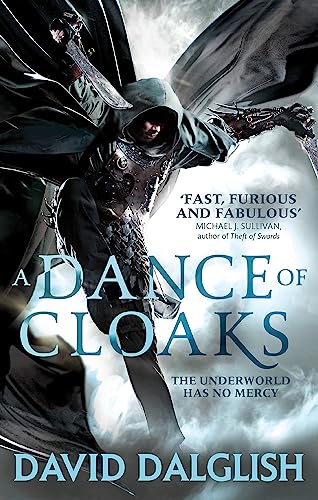 A Dance of Cloaks
by David Dalglish

Out of Stock
$17.49
inc. GST
The electrifying and gritty debut novel of assassins from bestselling fantasy author David Dalglish
Very Good
Only 0 left

A Dance of Cloaks Summary

A Dance of Cloaks: Book 1 of Shadowdance by David Dalglish

The Underworld rules the city of Veldaren. Thieves, smugglers, assassins . . . they fear only one man.

Thren Felhorn is the greatest assassin of his time. All the thieves' guilds of the city are under his unflinching control. If he has his way, death will soon spill out from the shadows and into the streets.

Aaron is Thren's son, trained to be heir to his father's criminal empire. He's cold, ruthless - everything an assassin should be. But when Aaron risks his life to protect a priest's daughter from his own guild, he glimpses a world beyond poison, daggers and the iron rule of his father.

Assassin or protector; every choice has its consequences.

Fantasy author David Dalglish spins a tale of retribution and darkness, and an underworld reaching for ultimate power.

A Dance of Cloaks Reviews

Buy the book and budget for the rest; you'll want to see this story through to the end * SFX *
Dalglish is well on his way to join the ranks of Peter V. Brett and Brent Weeks as influential authors in a new generation of fantasy * FANTASY FACTION *
Fast, furious and fabulous * Michael J. Sullivan, author of THEFT OF SWORDS *
A winning combination of A Game of Thrones, sword-and-sorcery RPGs, and vivid description . . . The point of view shifts continually, encompassing bit players and major characters from every angle of the struggle, and Dalglish handles his cast of thousands with aplomb . . . this is a fun read. Dalglish puts familiar pieces together with a freshness and pleasure that are contagious * PUBLISHERS WEEKLY *
Dalglish concocts a heady cocktail of energy, breakneck pace and excitement that a reader could get drunk on -- Sam Sykes, author of TOME OF THE UNDERGATES
A gritty book with intriguing characters and has a plot which will keep you hooked till the end * FANTASY BOOK CRITIC *
An excellently paced, character driven fantasy novel * BOOKBAG *
The prose is solid, the pace wonderful and when the action happens its quick, fast and to the point . . . Back that up with a cracking supporting cast alongside an inventive world and all round I was a very happy reader. Great stuff * Falcata Times *
Fans of A Game of Thrones should most definitely take note of this extremely exciting first book in the Shadow Dance series. Bring on book 2! * FICTION FASCINATION *

David Dalglish currently lives in rural Missouri with his wife Samantha, daughter Morgan, and dog Asimov. He graduated from Missouri Southern State University in 2006 and currently devotes himself to perfecting his craft. He spends his free time playing racquetball and watching PBS with his daughter.

GOR005354654
A Dance of Cloaks: Book 1 of Shadowdance by David Dalglish
David Dalglish
Shadowdance
Used - Very Good
Paperback
Little, Brown Book Group
2013-10-08
480
0356502783
9780356502786
N/A
Book picture is for illustrative purposes only, actual binding, cover or edition may vary.
This is a used book - there is no escaping the fact it has been read by someone else and it will show signs of wear and previous use. Overall we expect it to be in very good condition, but if you are not entirely satisfied please get in touch with us.