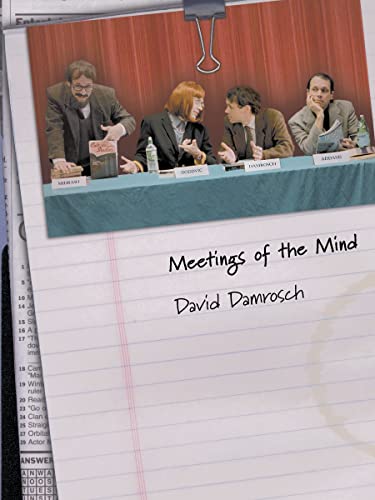 Meetings of the Mind
by David Damrosch

In Stock
$21.99
inc. GST
Comic in tone but of serious intent, this work presents a portrait of academic life in the 1990s. It debates whether it is possible, academically, to look beyond the old ideal of common purposes and commumal agreement, given ever-changing campus populations and critical perspectives.
Very Good
Only 2 left

Meetings of the Mind Summary

Meetings of the Mind by David Damrosch

Comic in tone and serious in intent, this book gives a vivid portrait of academic life in the nineties. With campus populations and critical perspectives changing rapidly, academic debate needs to look beyond the old ideal of common purposes and communal agreement. How can we learn from people we won't end up agreeing with? This question is explored by four very different scholars, who meet and argue at a series of comparative literature conferences: David Damrosch, liberal humanist and organiser of the group; Vic Addams, an independent scholar of aesthetic leanings (and author of "The Utility of Futility"); Marsha Doddvic, a feminist film theorist; and the Israeli semiotician Dov Midrash. Throughout the 1990s, in four cities, they meet and debate the problems of disciplinary definition and survival, the relation of literary theory to society, the politics of cultural studies and the virtues and vices of autobiographical criticism. As their partly antagonistic, increasingly serious, surprisingly fond and always funny relationship develops, Damrosch seeks common ground with his friends despite the fundamental differences among them. Can a self-parodying deconstructionist and a Proust aficionado appreciate and improve each other's work? Can a wealthy, windsurfing medievalist and a champion of Chicana lesbian memoirs find friendship? Hilarious exchanges and comic moments, as well as cameo appearances by well-known theorists, should entertain all literary-minded readers. Academic insiders should also be reminded of the foibles and quirks of their own disciplines and departments. At the same time, this exploration of the uses and abuses of literary and cultural criticism offers a running commentary on identity politics and poses serious questions about the state and future of the academy.

Meetings of the Mind Reviews

"In this sparkling comedy of ideas, David Damrosch perfectly captures the seriocomic essence of intellectual conference culture today. Part David Lodge and Jorge Luis Borges, part Oscar Wilde's 'Decay of Lying,' part Damrosch's own lively and ingenious speculations about the state of postmodern academe, Meetings of the Mind presents a search for true community beyond the self-absorption and pseudo-communication of academic life."-Gerald Graff
"There is a lot of chortling in this book . . . Having chortled, Damrosch's colleagues in the profession may perceive a serious issue in his book. Theory has had a bad effect. The higher the level of discourse, the fewer who can understand it."---John Sutherland, Times Literary Supplement
"This is a wonderful book, witty, thoughtful, informed, and helpful, and cast in an imaginative form which itself both asks questions about literature and suggests paths towards answers. It is a great trick, and also more than a trick-a book that shows what thinking looks like and makes you think. The title is perfect: these are meetings of minds, and meetings that perhaps, at present, can take place only in the mind. Only in a mind as alert and multiple as David Damrosch's."-Michael Wood
"As full of malice, repartee, and discovered identity as a countryhouse weekend. Made to order for those who've always wondered what really goes on at those scholarly conferences."-Bruce Robbins

David Damrosch is Professor of English and Comparative Literature at Columbia University. He is the author of The Narrative Covenant and We Scholars: Changing the Culture of the University and the general editor of The Longman Anthology of British Literature.

GOR007404650
Meetings of the Mind by David Damrosch
David Damrosch
Used - Very Good
Hardback
Princeton University Press
2000-08-06
224
0691050554
9780691050553
N/A
Book picture is for illustrative purposes only, actual binding, cover or edition may vary.
This is a used book - there is no escaping the fact it has been read by someone else and it will show signs of wear and previous use. Overall we expect it to be in very good condition, but if you are not entirely satisfied please get in touch with us.