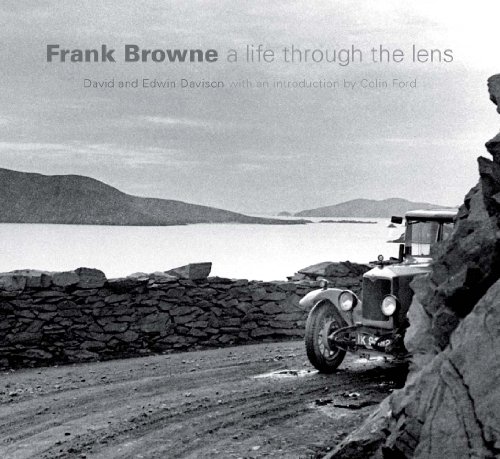 In Stock
$63.99
inc. GST
Born in Cork, Ireland, Francis Browne (1880-1960) was both a distinguished Jesuit and an accomplished photographer. In this book, Father Browne's remarkable life is recorded in a selection of images.
Very Good
Only 1 left

Frank Browne: A Life through the Lens by David Davison

Born in Cork, Ireland, Frank Browne (1880-1960) was both a distinguished Jesuit and an accomplished photographer. At age 17, before commencing his studies for the priesthood, he embarked on a tour of Europe armed with a camera. Browne quickly discovered a strong affinity for photography, and continued to take photographs throughout his life. It was not until 1985, however-when Father Edward O'Donnell SJ discovered a large trunk in the Irish Jesuit Provincial's House and found it packed with negatives and photographs-that Browne was catapulted to international fame. Father Browne's remarkable life is recorded in the superb selection of images presented in this book. With wit and a sharp eye, he observed 20th-century Ireland; life as a Jesuit priest; his experience as a passenger on the first leg of the voyage of the Titanic in 1912; and his later travels throughout Europe, Egypt, Yemen, Ceylon, and Australia. This handsome, copiously illustrated volume offers a complete survey of the photographic work of an exceptional man.

'Father Francis Browne is fated to be best remembered for the unique and unforgettable images he took during those few days aboard the doomed Titanic. But this new book shows he deserves a rather wider place in photographic history. The rediscovery and restoration of his huge treasure trove of photographs is one of the most satisfying results of today's increasing study and archiving of the history of the medium.'-Colin Ford, Black & White Photography.
-- Colin Ford * Black & White Photography *
"The Davisons take the lead with the present volume, which distinguishes itself from its predecessors in format and quality...[M]ost of the earlier books were conceived as narrowly-focused scrapbooks, combining multiple photographs on each page, often alongside newspaper clippings and other ephemera, A Life Through the Lens has higher ambitions. Most of its pages reproduce a single beautifully-printed photograph to emphasize its tonal nuances and formal, rather than historical interest."-Ash Anderson, Journal of Jesuit Studies -- Ash Anderson * Journal of Jesuit Studies *

David and Edwin Davison are photographers living in Dublin. They have been responsible for the conservation and cataloguing of Father Browne's original negatives.

GOR006333587
Frank Browne: A Life through the Lens by David Davison
David Davison
Used - Very Good
Hardback
Yale University Press
2014-11-04
224
0300208154
9780300208153
N/A
Book picture is for illustrative purposes only, actual binding, cover or edition may vary.
This is a used book - there is no escaping the fact it has been read by someone else and it will show signs of wear and previous use. Overall we expect it to be in very good condition, but if you are not entirely satisfied please get in touch with us.