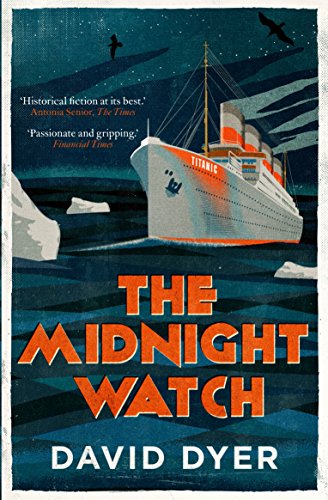 The Midnight Watch by David Dyer

The Midnight Watch is at once a heart-stopping mystery and a deeply knowing novel - about the frailty of men, the strength of women, the capriciousness of fate and the price of loyalty.

The Midnight Watch: A gripping novel of the SS Californian, the ship that failed to aid the sinking Titanic by David Dyer

A fascinating, revelatory novel based on the true story of the ship, and its crew, that failed to come to the sinking Titanic's aid. Set on board the Californian during those terrible hours, and in Boston in the aftermath of the disaster, Antonia Senior has called 'historical fiction at its best'. A perfect read for fans of Robert Harris and CJ Sansom, which gives a whole new side to A Night To Remember.

On a black night in April 1912, fifteen hundred passengers and crew perish as the Titanic slowly sinks beneath the freezing waters of the North Atlantic. Charting the same perilous course through the icebergs is the SS Californian, close enough for her crew to see the eight white distress rockets fired by the Titanic. Yet the Californian fails to act, and later her crew insist that they saw nothing.

As news of the disaster spreads throughout America, journalists begin a feeding frenzy, desperate for stories. John Steadman is one such reporter, a man broken by alcoholism, grief and a failed marriage. Steadman senses blood as he fixates on the Californian and his investigation reveals a tense and perplexing relationship between the ship's captain and second officer, who hold the secrets of what occurred that night. Slowly he peels back the layers of deception, and his final, stunning revelation of what happened while the Titanic sank will either redeem the men of the Californian, or destroy them.

Historical fiction at its best. -- Antonia Senior * The Times *
Passionate and gripping. * Financial Times *
David Dyer turns the sparse record of why the Californian did not go to the aid of the sinking Titanic into a gripping novel of flawed people, missed chances, and suspense. * Charlotte Rogan, author of The Lifeboat *
In The Midnight Watch, David Dyer makes the story of the sinking of the Titanic brand new-he even makes you wonder what will happen. This superb novel, the disaster we think we know, comes freshly alive through its unfamiliar point of view, and David Dyer's vivid eye for the right and telling detail. * Peter Nichols, bestselling author of The Rocks *
A fascinating novel. David Dyer has captured all the drama and emotion of the Titanic disaster from an intriguing new perspective. Clever, gripping and utterly compelling. Historical fiction at its very best. * Hazel Gaynor, New York Times and USA Today bestselling author of The Girl Who Came Home and A Memory of Violets *
The Midnight Watch opens fresh portals on a monumental event with all the tools of strong historical fiction: deep research, methodical recreations, and an array of memorable perspectives. Dyer proves why sometimes it takes fiction to answer history's question of "How could this happen?" A compelling read and a journey through this moment in time. * Matthew Pearl, New York Times bestselling author of The Dante Club and The Last Bookaneer *
David Dyer has achieved that very rare thing, an historical account of a major event involving impeccable research and detail, yet one that is a novel first and foremost. The Midnight Watch is a compelling read, insightful, compassionate and deeply moving from start to finish. -- Debra Adelaide, author of THE HOUSEHOLD GUIDE TO DYING
[A] hugely impressive debut novel, a fascinating piece of historical fiction * RTE Guide *
David Dyer spent many years as a lawyer at the London legal practice whose parent firm represented the Titanic's owners in 1912. He has also worked as a cadet and ship's officer on a wide range of merchant vessels, having graduated with distinction from the Australian Maritime College. He now teaches English literature in Sydney. This is his first novel.
GOR008332449
9781782397823
1782397825
The Midnight Watch: A gripping novel of the SS Californian, the ship that failed to aid the sinking Titanic by David Dyer
David Dyer
Used - Very Good
Paperback
Atlantic Books
2017-04-06
336
N/A
Book picture is for illustrative purposes only, actual binding, cover or edition may vary.
This is a used book - there is no escaping the fact it has been read by someone else and it will show signs of wear and previous use. Overall we expect it to be in very good condition, but if you are not entirely satisfied please get in touch with us
Trustpilot