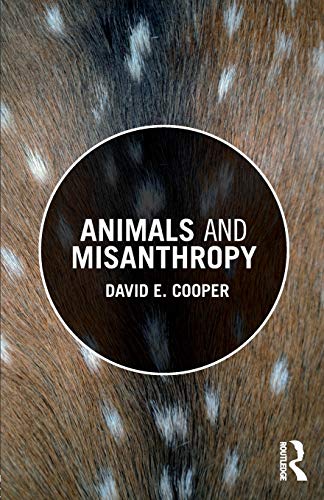 This engaging volume explores and defends the claim that misanthropy is a justified attitude towards humankind in the light of how human beings both compare with and treat animals. Reflection on differences between humans and animals helps to confirm the misanthropic verdict, while reflection on the moral and other failings manifest in our treatment of animals illuminates what is wrong with this treatment. Human failings, it is argued, are too entrenched to permit optimism about the future of animals, but ways are proposed in which individual people may accommodate to the truth of misanthropy through cultivating mindful, humble and compassionate relationships to animals. Drawing on both Eastern and Western philosophical traditions David E. Cooper offers an original and challenging approach to the complex field of animal ethics.

"In this lucid and elegant book Cooper draws effortlessly on literature and world philosophy to gather evidence for a bleakly compelling verdict on the morally barbarous condition of humanity through a consideration of how we compare with and treat animals, particularly those at our mercy, refreshing the meaning of misanthropy."

"In this short, powerful book, David E. Cooper argues that honest reflection on the awful situation of animals justifies a charge of misanthropy - a negative moral judgment on human life at large. Surveying practices and institutions such as animal agriculture, we find a variety of human vices and failings - cruelty, insensitivity, hubris - so entrenched and extensive that they warrant critical judgment on nothing less than our way of life itself. By contrast, lucid appreciation of the lives of animals shows them to be characterised by spontaneity and other virtues, alongside a fundamental vulnerability ruthlessly exploited by human beings. By drawing upon the writings of Western and Asian philosophers and others engaged personally and professionally with animals, Cooper advances a charge of misanthropy that corrects vainglorious moral optimism and points to other, better ways to live with animals."

"David E. Cooper's Animals and Misanthropy is a meditation on animals and humans. It is also an argument for a negative view of humankind. Humanity's vices, Professor Cooper argues, are in full display in its treatment of animals - beings that are themselves innocent. He writes with sensitivity about animals and without rancour about humans, thus defending a gentle but uncompromising misanthropy. You do not have to be respectful of animals or misanthropic to start reading this book, but don't be surprised if you are both after you have finished it."

"Animals and Misanthropy explores our dark side as human beings by contrasting it with the innocence of the animals we so often mistreat. It is an important and strikingly original contribution to the field of animal ethics, and essential reading, surely, for anyone concerned with our moral relations to the more-than-human world."

David E. Cooper is Emeritus Professor of Philosophy at Durham University, UK. He has been a Visiting Professor at universities in several countries, including the USA and Sri Lanka. His many books include The Measure of Things: Humanism, Humility and Mystery, A Philosophy of Gardens, Convergence with Nature: A Daoist Perspective, and Senses of Mystery: Engaging with Nature and the Meaning of Life.

A lesson from David Hume

GOR011140273
Animals and Misanthropy by David E. Cooper (University of Durham, UK)
David E. Cooper (University of Durham, UK)
Used - Like New
Paperback
Taylor & Francis Ltd
2018-02-07
146
1138295949
9781138295940
N/A
Book picture is for illustrative purposes only, actual binding, cover or edition may vary.
The book has been read, but looks new. The book cover has no visible wear, and the dust jacket is included if applicable. No missing or damaged pages, no tears, possible very minimal creasing, no underlining or highlighting of text, and no writing in the margins
Trustpilot