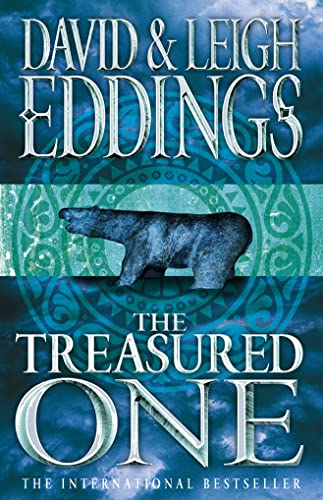 The second brilliant book in a brand new fantasy series set in an entirely new world from bestselling authors David and Leigh Eddings.

The second brilliant book in a brand new fantasy series set in an entirely new world from bestselling authors David and Leigh Eddings.

`Offers an absorbing storyline and some memorable characters as, once again, the author touches all the right fantasy bases, with warring gods, political intrigues, supernatural creatures and appealingly human magicians involved in a titanic war over the course of seven millennia. Eddings fans will no doubt snatch this novel off the shelves while readers new to the authors'
world won't find a more appropriate place to begin exploring it.' Publishers Weekly

`There's no denying Eddings' offerings do entertain. This novel is for fantasy fans fed up with more fusty fare, or for anyone who likes mischief and merriment.' West Australian

GOR002613764
The Treasured One by David Eddings
David Eddings
Used - Very Good
Hardback
HarperCollins Publishers
2004-07-05
528
0007157614
9780007157617
N/A
Book picture is for illustrative purposes only, actual binding, cover or edition may vary.
This is a used book - there is no escaping the fact it has been read by someone else and it will show signs of wear and previous use. Overall we expect it to be in very good condition, but if you are not entirely satisfied please get in touch with us.