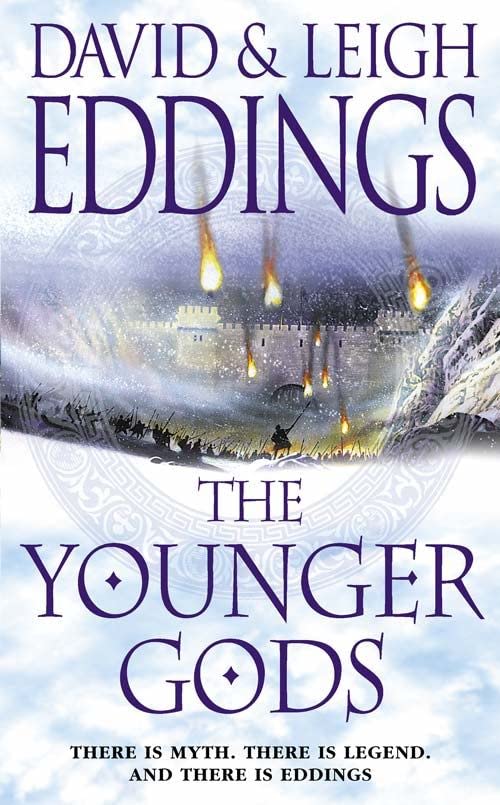 The Younger Gods
by David Eddings

This is the exciting final volume in the glorious fantasy series The Dreamers. From the masters of modern fantasy, a magical, action packed, totally engaging and characterful story of mythical proportions featuring gods, people and other creatures.

The Younger Gods by David Eddings

This is the exciting final volume in the glorious fantasy series The Dreamers. From the masters of modern fantasy, a magical, action packed, totally engaging and characterful story of mythical proportions featuring gods, people and other creatures.

The attacks of the dreadful insect queen known as the Vlagh have been repelled in three of the Elder Gods' realms. Now, only the land ruled by the Goddess Aracia remains for the Vlagh to send her hordes to attack.

But while the Gods, their younger avatars and their human comrades have emerged victorious from all previous encounters, this time the Goddess herself may be their greatest foe - she craves worship and hates the idea of being replaced by a younger God when her time comes to an end...and that time is approaching fast.

A mighty conclusion to a fabulous series!

`My ideal summer read... Having enjoyed the entire ten-book serial, I was delighted to be able to read this latest addition as it not only provides fantastic escapism in itself, but, being a prequel, will make my re-reading of the other books all the more fascinating.'
The Irish Times

`Offers an absorbing storyline and some memorable characters as, once again, the author touches all the right fantasy bases, with warring gods, political intrigues, supernatural creatures and appealingly human magicians involved in a titanic war over the course of seven millennia. Eddings fans will no doubt snatch this novel off the shelves while readers new to the authors' world won't find a more appropriate place to begin exploring it.'
Publishers Weekly

`There's no denying Eddings' offerings do entertain. This novel is for fantasy fans fed up with more fusty fare, or for anyone who likes mischief and merriment.'
West Australian

David Eddings was born in Washington State and grew up near Seattle. He graduated from the University of Washington and went on to serve in the US Army. Subsequently he worked as a buyer for the Boeing company and taught college-level English. His first novel was a contemporary adventure, but he soon began a spectacular career as a fantasy writer with his bestselling series The Belgariad.

GOR001271207
The Younger Gods by David Eddings
David Eddings
Used - Very Good
Paperback
HarperCollins Publishers
2007-05-01
400
000715769X
9780007157693
N/A
Book picture is for illustrative purposes only, actual binding, cover or edition may vary.
This is a used book - there is no escaping the fact it has been read by someone else and it will show signs of wear and previous use. Overall we expect it to be in very good condition, but if you are not entirely satisfied please get in touch with us.