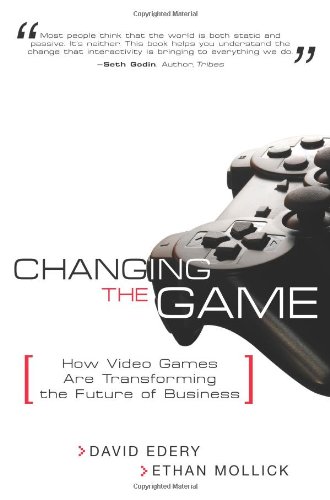 Changing the Game
by David Edery

Changing the Game: How Video Games Are Transforming the Future of Business (paperback) by David Edery

Companies of all shapes and sizes have begun to use games to revolutionize the way they interact with customers and employees, becoming more competitive and more profitable as a result. Microsoft has used games to painlessly and cost-effectively quadruple voluntary employee participation in important tasks. Medical schools have used game-like simulators to train surgeons, reducing their error rate in practice by a factor of six. A recruiting game developed by the U.S. Army, for just 0.25% of the Army's total advertising budget, has had more impact on new recruits than all other forms of Army advertising combined. And Google is using video games to turn its visitors into a giant, voluntary labor force--encouraging them to manually label the millions of images found on the Web that Google's computers cannot identify on their own.

Changing the Game reveals how leading-edge organizations are using video games to reach new customers more cost-effectively; to build brands; to recruit, develop, and retain great employees; to drive more effective experimentation and innovation; to supercharge productivity...in short, to make it fun to do business. This book is packed with case studies, best practices, and pitfalls to avoid. It is essential reading for any forward-thinking executive, marketer, strategist, and entrepreneur, as well as anyone interested in video games in general.

David Edery is the Worldwide Games Portfolio Manager for Microsoft's Xbox Live Arcade and also a research affiliate of the MIT Comparative Media Studies Program. Prior to joining Microsoft, David was the MIT CMS Program's Associate Director for Special Projects. During that time, David cofounded the Convergence Culture Consortium, a research partnership with corporations such as MTV Networks and Turner Broadcasting. David also managed Cyclescore, a research project combining video games and exercise. David received his MBA from the MIT Sloan School of Management and his BA from Brandeis University. He has published articles in the Harvard Business Review and several game industry publications and has spoken at many entertainment industry conferences.

Ethan Mollick studies innovation and entrepreneurship at the MIT Sloan School of Management, where he is also conducting a large research project on the game industry. He holds an MBA from MIT and BA from Harvard University. He has consulted to companies ranging from General Mills to Eli Lilly on issues related to innovation and strategy. He has also worked extensively on using games for teaching and training, including on the DARWARS project of the Defense Advanced Research Projects Agency. He was a founder of eMeta Corporation, the world's largest supplier of software for selling content online, which was sold to Macrovision in 2006. Prior to eMeta, Ethan was a consultant for Mercer Management Consulting. He has published articles in scholarly journals, the Sloan Management Review, and Wired magazine and spoken at numerous conferences.

Chapter 1: An Introduction to Games, and Why They Matter 3

Part IV: Games and the Future of Business 155

Chapter 10: Why Gamers are Better than Computers, Scientists, and Governments 187

GOR005376940
Changing the Game: How Video Games Are Transforming the Future of Business (paperback) by David Edery
David Edery
Used - Very Good
Hardback
Pearson Education (US)
2008-10-07
240
013235781X
9780132357814
N/A
Book picture is for illustrative purposes only, actual binding, cover or edition may vary.
This is a used book - there is no escaping the fact it has been read by someone else and it will show signs of wear and previous use. Overall we expect it to be in very good condition, but if you are not entirely satisfied please get in touch with us.