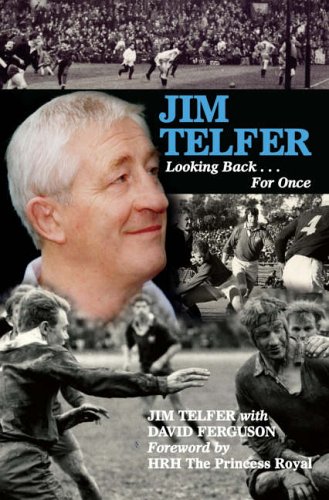 Used Price
$33.99
inc. GST
Free Shipping in Australia
Jim Telfer is one of the greats of international rugby, with a career spanning more than five decades.A quiet Borderer with strong opinions, Telfer has intriguing views on rugby in each of the home nations, the influence of the southern hemisphere, the changing motivation of players, and the rugby media.
Reviews:
Trustpilot
Very Good Good

Jim Telfer: Looking Back . . . For Once by David Ferguson

Jim Telfer is one of the greats of international rugby, with a career spanning more than five decades. Looking Back . . . For Once is the long-awaited autobiography which reveals how a shepherd's son from the Borders became the major driving force in the most successful days of Scottish rugby and steered the game into the professional era. As a captain and coach of Scotland and coach of the British and Irish Lions, Telfer has stirred controversy from his native Borders to New Zealand, but it is now time to set the record straight. What made him lambast New Zealand rugby in its Canterbury heartland? Why did he not select his 'best-ever Scottish forward' for a Lions tour? Where did he feel he got it right, and wrong, in selecting foreigners for Scotland and sacking coaches? And, in the opinion of one whose playing and coaching careers spanned more generations than any other Scot, what was the best Scotland team? Telfer remains the only Scottish player to have faced the three southern hemisphere giants - Australia, New Zealand and South Africa - and never lost. He is the sole link between Scotland's last two Grand Slams and their Five Nations Championship triumph. A quiet Borderer with strong opinions, Telfer has intriguing views on rugby in each of the home nations, the influence of the southern hemisphere, the changing motivation of players, and the rugby media. But this is more than a rugby book. In this candid autobiography, Telfer expresses his sadness at the prospect of life without children and his subsequent delight in adopting; reveals how his teaching career was blighted by tragedy in Glasgow but invigorated by a long-haired eccentric; and why his final years at the helm of Scottish rugby almost destroyed his appetite for the sport. From the day he was born in 1940, when a wartime fighter plane crashed into the hills around his home, to the storms he rode both in and out of the game, Telfer has rarely shirked a confrontation. And yet, with personal contributions to his book coming from Martin Johnson, Colin Meads, Andy Irvine and Gregor Townsend among many others, he clearly remains one of the most widely respected men in world rugby. This is his story.

"'Telfer lets rip'." -- David Kelso * Scottish Daily Express *
"'One could sit and listen to Jim Telfer all day; if you do not have that opportunity, then this book is more than just a more than suitable replacement. You can hear the man as you read'." -- Atholl Innes * Border Telegraph *
"'Many sporting autobiographies suffer from their authors shying away from any unpalatable truths that might dent the lustre of their reputations. Not so Jim Telfer'." -- Mark Entwistle * Southern Reporter *

Jim Telfer has been a mainstay of Scottish rugby since the early 1960s. In the '90s, he took over as the Scottish Rugby Union's first full-time director of rugby. A third Grand Slam and a Five Nations win book-ended that decade and he retired from the game at the end of 2003. David Ferguson is the chief rugby writer with The Scotsman. He has reported on rugby across Scotland and abroad for the past 16 years, covering several World Cup tournaments and British and Irish Lions tours.

GOR001354481
Jim Telfer: Looking Back . . . For Once by David Ferguson
David Ferguson
Used - Very Good
Hardback
Transworld Publishers Ltd
2005-09-08
256
1845960629
9781845960629
N/A
Book picture is for illustrative purposes only, actual binding, cover or edition may vary.
This is a used book - there is no escaping the fact it has been read by someone else and it will show signs of wear and previous use. Overall we expect it to be in very good condition, but if you are not entirely satisfied please get in touch with us.