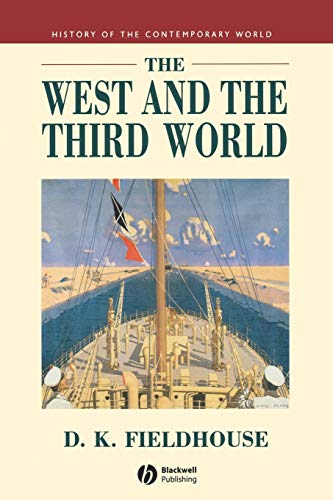 The West and the Third World
by David Fieldhouse

Used Price
$37.99
inc. GST
Free Shipping in Australia
aeo Addresses the question of whether Third World countries have benefited or suffered from close relationships with the West aeo Provides an historical perspective on an issue of continuing debate aeo Interdisciplinary work of relevance to students in history, geography, economics and the social sciences.
Like New Very Good Good Well Read

The West and the Third World Summary

The West and the Third World: Trade, Colonialism, Dependence and Development by David Fieldhouse

This comprehensive survey of the nature of the relationship between the Western countries and the Third World, and the debate over its effects, during the twentieth century matches development theory with wide--ranging evidence on the consequences of global integration.

The West and the Third World Reviews

"The West and the Third World will be enjoyed by a wide audience. Richly flavoured with comparative insights, this book will appeal to specialists and students alike." English Historical Review "This is an impressive and useful work, providing historical perspective for crucial contemporary issues of economic development in the Third World." The Historian "This is a large project requiring deep understanding of the way in which the world economy has evolved and of the changing political relations between Europe, America and the rest of the world. Indeed, it is difficult to think of anyone better qualified for this task than Fieldhouse; and the result is a book of great authority ... The book is also written clearly and can be easily followed by the non--expert." History "Recommended for general readers; lower division undergraduate through beginning graduate students." Choice "An interesting introduction for students from a range of disciplines interested in the relations between different world regions." Progress in Development Studies

David Kenneth Fieldhouse, FBA was an English historian of the British Empire who between 1981 and 1992 held the Vere Harmsworth Professorship of Imperial and Naval History at the University of Cambridge.

GOR010755030
The West and the Third World: Trade, Colonialism, Dependence and Development by David Fieldhouse
David Fieldhouse
History of the Contemporary World
Used - Like New
Paperback
John Wiley and Sons Ltd
1999-01-10
396
0631194398
9780631194392
N/A
Book picture is for illustrative purposes only, actual binding, cover or edition may vary.
The book has been read, but looks new. The book cover has no visible wear, and the dust jacket is included if applicable. No missing or damaged pages, no tears, possible very minimal creasing, no underlining or highlighting of text, and no writing in the margins.