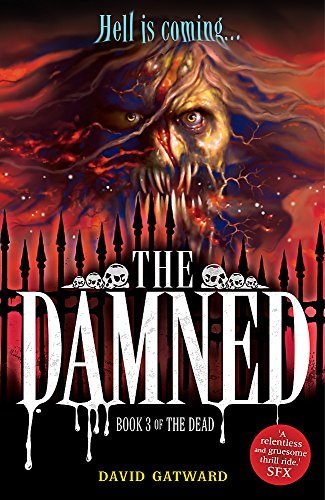 The Dead: The Damned
by David Gatward

The Dead: The Damned Summary

The Dead: The Damned: Book 3 by David Gatward

Tombs. Hundreds of them. All lying in concentric rings in the greasy, cold darkness of the cavern. At their very centre, hanging from a burnt and blackened tree. a huge, cracked bell. And under that, The Gate, built from the bones of a thousand murdered souls. Lazarus knew ringing the bell would be very bad. He also knew he had no choice - he needed the kind of help only Hell could give him... The Dead don't just want to return, they want Earth for themselves. And it's Lazarus Stone, Keeper of the Dead, who has to stop them. Trouble is, the Dead are the exact opposite of rotting, stumbling corpses. And they desire one thing only: to live again. To do that, all they need is a good supply of fresh, warm bodies... Lazarus now knows his mum murdered him, betrayed his dad, and is about to open a portal between worlds that will bring about the end of life as we know it. Trouble is, his best mate has disappeared (again), he still hasn't rescued his dad (but he will), and the only help he has is that of an undead priest (who carries a blunderbuss) and a female angel (who drives a 4x4 and has an alcohol problem). This isn't just about saving the world, this is personal...

The Dead: The Damned Reviews

David Gatward is going to become a big name in YA horror circles. * The Book Zone *
There's a great deal to enjoy in this book and the series seems set to provide lots more. Teen horror fans are going to love it. * The Bookbag *
The Dead is infused with an anarchic, breakneck, heavy metal sensibility - and tons of gore... * SFX Magazine *
Looking for chills, spine tingling weirdness, and gut-wrenching gore? Well, this book will hit the spot. * Flipside Magazine *
A weekend spent in the company of The Dead is a weekend spent well. * GoreZone Magazine *
'... the kind of imaginative, exciting horror thriller that seems all too rare in genre fiction ...' FIVE STAR REVIEW * Film 4 Frightfest *

David was born in Bristol and grew up with his two younger brothers between the Cotswolds, Wensleydale and Lincolnshire. Aside from having a huge number of hobbies including: caving, camping, climbing, archery, shooting and music, David also wrote avidly. Although he had his first book published aged 18, it's taken many more years and life experiences to lead to writing The Dead. Seeing two ghosts, being mistaken for a homeless person and almost drowning have given David plenty of food for thought, but it's his family who've been a big inspiration. Now living in rural Somerset with his wife and two boys, David writes full-time and hopes to see ghost number three very shortly.

GOR003201123
The Dead: The Damned: Book 3 by David Gatward
David Gatward
The Dead
Used - Very Good
Paperback
Hachette Children's Group
2011-04-07
368
0340999713
9780340999714
N/A
Book picture is for illustrative purposes only, actual binding, cover or edition may vary.
This is a used book - there is no escaping the fact it has been read by someone else and it will show signs of wear and previous use. Overall we expect it to be in very good condition, but if you are not entirely satisfied please get in touch with us.