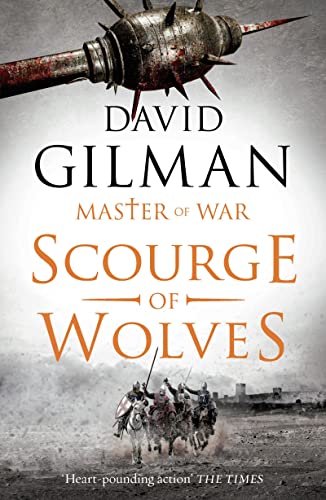 Scourge of Wolves
by David Gilman

Episode five of the gritty historical fiction series, as Thomas Blackstone fights to enforce English rule on France at the height of the Hundred Years' War.

Scourge of Wolves by David Gilman

After two decades of conflict, Edward III has finally agreed a treaty with the captive French King, John II. In return for his freedom, John has ceded vast tracts of territory to the English. But for five long years mercenary bands and belligerent lords have fought over the carcass of his kingdom. They will not give up their hard-won spoils to honour a defeated king's promises.

As he battles to enforce Edward's claim, Thomas Blackstone will see his name blackened, his men slaughtered, his family hunted. He will be betrayed and, once again, he'll face the might of the French army on the field. But this time there will be no English army at his back. He'll face the French alone.

'Gripping ... The narrative is exceptionally pacey and atmospheric; it has heart. The historical background is fascinating, accurate and thoroughly researched. The novel's characterisation is thoroughly rounded and convincing. It is an exceptionally well-written book with such vivid prose it easily transports the reader back into the high medieval world' Historical Novel Society.
'If you haven't read any of David's Master of War series, I can heartily recommend them, just great reading that keeps you engaged all the way through' Devonshire Magazine.

David Gilman enjoyed many careers - including firefighter, paratrooper and photographer - before turning to writing full time. He is an award-winning author and screenwriter.

GOR009576697
Scourge of Wolves by David Gilman
David Gilman
Master of War
Used - Very Good
Paperback
Head of Zeus
2018-08-09
464
1784974528
9781784974527
N/A
Book picture is for illustrative purposes only, actual binding, cover or edition may vary.
This is a used book - there is no escaping the fact it has been read by someone else and it will show signs of wear and previous use. Overall we expect it to be in very good condition, but if you are not entirely satisfied please get in touch with us.