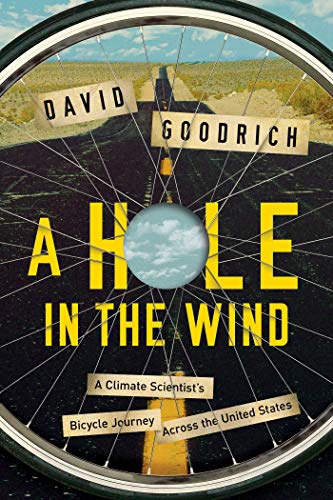 A Hole in the Wind by David Goodrich

An epic bicycle journey across the American hinterland that explores the challenges of climate change alongside a diverse array of American voices.

A Hole in the Wind: A Climate Scientist's Bicycle Journey Across the United States by David Goodrich

After a distinguished career in climate science as the Director of the UN Global Climate Observing System in Geneva, David Goodrich returned home to the United States to find a nation and a people in denial. Concerned that the American people are willfully deluded by the misinformation about climate that dominates media and politics, David thought a little straight talk could set things right. As they say in Animal House, he decided that "this calls for a stupid and futile gesture on someone's part, and I'm just the guy to do it."

Starting on the beach in Delaware, David rode his bike 4,200 miles to Oregon, talking with the people he met on the ultimate road trip. Along the way he learned a great deal about why climate is a complicated issue for many Americans and even more about the country we all share.

Climate change is the central environmental issue of our time. But A Hole in the Wind is also about the people Dave met and the experiences he had along the way, like the toddler's beauty pageant in Delaware, the tornado in Missouri, rust-belt towns and their relationship with fracking, and the mined-out uranium ghost town in Wyoming. As he rides, David will discuss the climate with audiences varying from laboratories to diners to elementary schools.

Beautifully simple, direct, and honest, A Hole in the Wind is a fresh, refreshing ride through a difficult and controversial topic, and a rich read that makes you glad to be alive.

"A detail-rich chronicle of the half-dozen epic bike rides Goodrich has undertaken since 2000, including a 2011 cross-country trip. Goodrich is a good enough reporter-and a sufficiently gifted stylist-to make the miles fly by." -- Washington Post
"This cyclist's view of how things really are effectively cuts across head-butting arguments about global warming. A compelling narrative enlivened as much by the author's encounters on the road as by his skillful unfolding of scientific knowledge." -- Kirkus Reviews
"Goodrich peppers his narrative with historical anecdotes, environmental science asides, and lots of travel details." -- Publishers Weekly
"At the end of a high-level career in climate science, David Goodrich cycled from Delaware to Oregon looking for a "hole in the wind" - a human future in the unrelenting march of climate change. Ultimately, he sees humanity's capacity for economic transformation and reform as up to the job." -- Nature
"The text rolls along as easily as his heavily-laden bike must have on those welcome downhill stretches. For a summer read that engages, entertains, and also educates, I can't recommend anything better than A Hole in the Wind." -- The Daily Local
"Combining personal reflections with sobering environmental facts and figures he takes along with him, [Goodrich] exposes a pervasive streak of climate change denial in the U.S. and shares the best antidotes for politically motivated misinformation. Entertaining and instructive, Goodrich's travelogue showcases one man's heroic efforts to confront this century's greatest environmental crisis." -- Booklist
"A diverting memoir for long-distance bikers and hikers." -- Library Journal
David Goodrich is the former head of the National Oceanic and Atmospheric Administration's Climate Observations and Monitoring Program, and served as the Director of the UN Global Climate Observing System in Geneva, Switzerland. He is the author of A Hole in the Wind, which was a "One City, One Book" pick for San Francisco, and is also available from Pegasus Books. He lives in Maryland.
NGR9781681774312
9781681774312
1681774313
A Hole in the Wind: A Climate Scientist's Bicycle Journey Across the United States by David Goodrich
David Goodrich
New
Hardback
Pegasus Books
2017-09-04
304
N/A
Book picture is for illustrative purposes only, actual binding, cover or edition may vary.
This is a new book - be the first to read this copy. With untouched pages and a perfect binding, your brand new copy is ready to be opened for the first time
Trustpilot