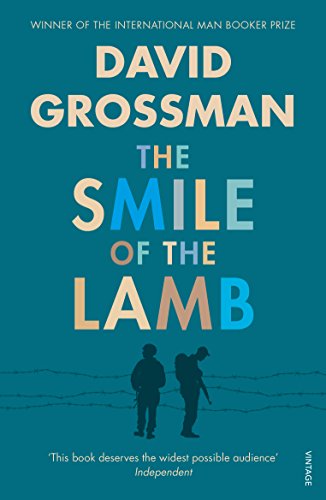 The Smile Of The Lamb
by David Grossman

In Stock
$22.49
inc. GST
Uri and Katzman are Israeli soldiers occupying a Palestinian village in the West Bank. Uri is idealistic and full of hope, feels the injustice of the occupation keenly, and becomes close to Khilmi, the village storyteller.
Very Good Good
Only 3 left

The Smile Of The Lamb Summary

The Smile Of The Lamb by David Grossman

Uri and Katzman are Israeli soldiers occupying a Palestinian village in the West Bank. Uri is idealistic and full of hope, feels the injustice of the occupation keenly, and becomes close to Khilmi, the village storyteller. Katzman on the other hand is 'a contracted muscle' - he has taught himself not to feel. And Shosh, Uri's wife, daughter of liberal immigrant parents and juvenile psychiastrist, is succumbing to her own struggles with power and truth. When Khilmi's adopted son is killed in a 'security operation' and when Uri discovers how far deception and injustice have penetrated into his own life, their reactions are drastic and unforseen.

The Smile Of The Lamb Reviews

"An extraordinary achievement...moving, many-layered, powerful, yet written with beautiful delicacy of touch, is a work of redemption... Combining the compassionate wisdom of the moralist with a true artist's creative imagination, this book deserves the widest possible audience" * Indepdendent *
"Bold, grand, mad, an astonishing meditation on art, religion, love, politics and war, despatched in language which is funny, ferocious and enraptured" * Observer *
"A courageous novel, the first attempt by an Israeli author of the post-1967 generation to come to terms with the consequences of the Occupation, to articulate how 'the conqueror is also the conquered, and injustice has teeth in its tail'" * Guardian *
"Extreme, enormous, almost embarrassingly good, a first novel whose very last page somehow fuses together the political and spiritual currents running through modern day Israel" * Time Out *
"At once sensitive, humane, elegiac and devoid of optimism, save a vague faith in love" * Sunday Times *

David Grossman is the bestselling author of numerous works, which have been translated into thirty-six languages. His most recent novels were To the End of the Land, described by Jacqueline Rose as `without question one of the most powerful and moving novels I have ever read', and Falling Out of Time. He is the recipient of the French Chevalier de l'Ordre des Arts et des Lettres and the 2010 Frankfurt Peace Prize.

GOR003285719
The Smile Of The Lamb by David Grossman
David Grossman
Used - Very Good
Paperback
Vintage Publishing
2010-09-02
336
0099552299
9780099552291
N/A
Book picture is for illustrative purposes only, actual binding, cover or edition may vary.
This is a used book - there is no escaping the fact it has been read by someone else and it will show signs of wear and previous use. Overall we expect it to be in very good condition, but if you are not entirely satisfied please get in touch with us.