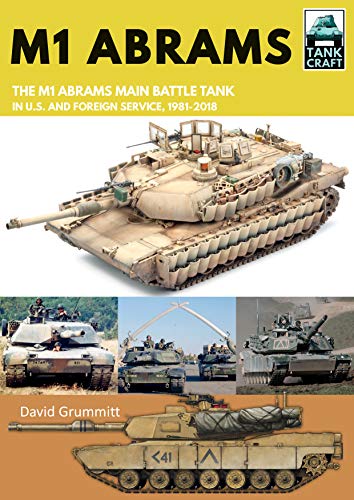 Used Price
$33.99
inc. GST
Free Shipping in Australia
Design and operational history of the US Abrams main battle tank from its Cold War origins, through its service in the Middle East, to its contemporary role in Nato.
Reviews:
Trustpilot
Like New

Since its introduction in 1981, at the height of the Cold War, the Abrams main battle tank has been one of the most visible and iconic symbols of American military power, and it is the fascinating subject of this heavily illustrated historical and modelling guide in the TankCraft series by David Grummitt. Designed to meet head-on the massed tank forces of the Warsaw Pact, its combat debut in fact came in a different scenario in 1991 during the First Gulf War. Since then it has served in the peace-keeping role in the former Yugoslavia and seen combat in Iraq, Afghanistan and Yemen. It has gone through a series of modifications and modernizations that see it set to remain the backbone of the US Army until at least 2050. As well as charting the development and combat history of the vehicle, the book is illustrated throughout with colour photos and specially commissioned colour profiles. Five different models, covering the service history of the Abrams, are featured, as is modeller's guide to the existing kits and accessories in the all the popular scales.

"Intended as a guide for military vehicle modellers, this highly detailed look at the M1 Abrams tank is as much a history of the vehicle as a modellers' aid."--Books Monthly
"There are at least seven models with photos which showcase the various camouflaged M1 models and finishes. As a model builder, these visual guides are important tools and provide the basis of much of what I attempt to recreate in my own models."--IPMS/USA
"This modeler's delight showcases the M1 and its variations with all sorts of camouflage schemes, from the desert tan of the Gulf Wars to the greens, blacks, and browns of the European theater."--Historical Miniatures Gaming Society

David Grummitt is editor of Military Modelcraft International with more than a decade of building models and writing articles for publication. As well as being editor of MMI since 2009, he is a professional historian who has written several books on fifteenth- and sixteenth-century military and political history

GOR010798294
M1 Abrams: The US's Main Battle Tank in American and Foreign Service, 1981-2018 by David Grummitt
David Grummitt
Tank Craft
Used - Like New
Paperback
Pen & Sword Books Ltd
2019-11-04
64
1526749750
9781526749758
N/A
Book picture is for illustrative purposes only, actual binding, cover or edition may vary.
The book has been read, but looks new. The book cover has no visible wear, and the dust jacket is included if applicable. No missing or damaged pages, no tears, possible very minimal creasing, no underlining or highlighting of text, and no writing in the margins.