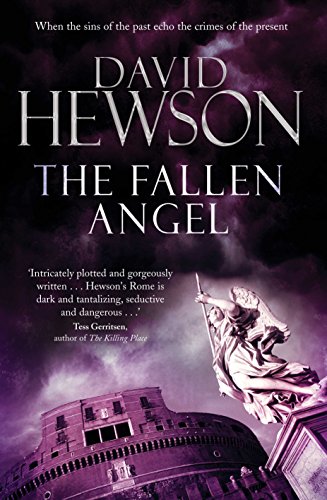 The Fallen Angel
by David Hewson

The Fallen Angel by David Hewson

When British academic Malise Gabriel falls to his death from a Rome apartment, detective Nic Costa rapidly comes to realize that there is much more to the accident than he had first thought. It also becomes apparent that Malise's family - mysterious and tragic daughter Mina, stoic wife Cecilia and troubled son Robert - may be keeping vital information hidden.

Nic becomes obsessed with the case, and is especially intrigued by Mina's story which seems to be linked with the sixteenth century-legend of a young Italian noblewoman, Beatrice Cenci.

As the investigation deepens, Rome's dark and seedy side is uncovered, revealing a web of deceit, treachery and corruption. Costa realizes that the key to the truth lies with the Gabriels. Why are they so unwilling to co-operate, and who, or what, is the reason for their silence?

Praise for "The Fallen Angel" "The main story takes time to gain momentum, but once secrets begin to be revealed, there's no stopping them. Readers will have a lot of fun peeling away the book's many layers, right down to the final, closing twist." -"Publishers Weekly", starred review."..the writing is superior, and the characters engage." -KirkusPraise for David Hewson's "City of Fear" "Will seize you and not let go until the last page has been turned."--Douglas Preston "Packs more twists and action into its brilliantly plotted pages than half a dozen other thrillers combined."--Linwood Barclay "Compelling storytelling and elegant prose . . . [an] intelligent and addictive series."--"Richmond Times-Dispatch" "Well-drawn characters, a brisk pace and . . . unexpected plot twists."--"Publishers Weekly"

Former Sunday Times journalist David Hewson is well known for his crime-thriller fiction set in European cities. He is the author of the highly acclaimed The Killing novels set in Denmark, the Detective Nic Costa series set in Italy and the Pieter Vos series in Amsterdam. The Killing trilogy is based on the BAFTA award-winning Danish TV series created by Soren Sveistrup and produced by DR, the Danish Broadcasting Corporation. While he lives in Kent, Hewson's ability to capture the sense of place and atmosphere in his fiction comes from spending considerable research time in the cities in which the books are set: Copenhagen, Rome, Venice and Amsterdam.

GOR010754414
The Fallen Angel by David Hewson
David Hewson
Used - Like New
Hardback
Pan Macmillan
2011-02-04
400
0230529372
9780230529373
N/A
Book picture is for illustrative purposes only, actual binding, cover or edition may vary.
The book has been read, but looks new. The book cover has no visible wear, and the dust jacket is included if applicable. No missing or damaged pages, no tears, possible very minimal creasing, no underlining or highlighting of text, and no writing in the margins.