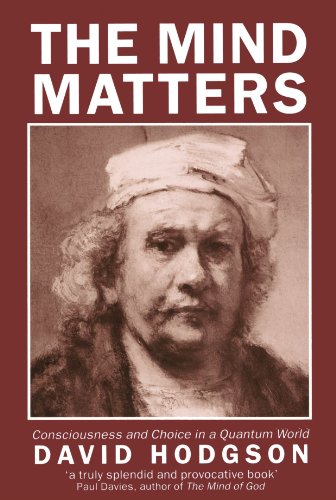 The Mind Matters
by David Hodgson

Out of Stock
$11.99
+10% GST
Do our conscious minds exert a non-physical influence on the workings of our brains, or are we just soft machines? Most scientists today opt for a mechanistic view of the human brain, but in this book - a fascinating blend of physics and philosophy - David Hodgson makes out a powerful case for the efficacy of the mind.
Very Good Good
Only 0 left

The Mind Matters: Consciousness and Choice in a Quantum World by David Hodgson

In this book David Hodgson presents a clear and compelling case against today's orthodox mechanistic view of the brain and mind, and in favour of the view that `the mind matters'. Although written from a philosophical viewpoint, the book has important implications for the sciences concerned with the brain and mind problem. At the same time, it is largely non-technical, and thus accessible to the non-specialist reader.

Mainstream professional philosophers of mind should perhaps feel humbled by the fact that while they have been satisfied for the most part with hanging on the coattails of currently fashionable theories in cognitive science and artificial intelligence, it has largely been left to those outside the profession, like David Hodgson, to pursue the most profound metaphysical questions concerning the relations between mind and matter - questions which cannot even be begun to be addressed adequately without an understanding, such as Hodgson has taken so many pains to acquire, of the most successful theory of matter that humanity has ever devised. * E. J. Lowe, Philosophical Books *
an excellent contribution to the literature. It is well written, authoritative, and wonderfully wide-ranging. ... This account of quantum theory ... will surely be of great value. ... On the front cover of the paper edition of this book Paul Davies is quoted as saying that this is "a truly splendid and provocative book". In writing this review I have allowed myself to be provoked, but I am happy to close by giving my endorsement to this verdict in its entirety! * Euan Squires, Journal of Consciousness Studies *
an astonishing achievement ... This is an ambitious, plain-spoken, and unevasive presentation of an anti-reductionist position based in, and drawing from, contemporary science. It is good to have it. * Keith Campbell, Australasian Journal of Philosophy *
a welcome new perspective on the subject ... Hodgson's book is the best I have seen for giving a clear and balanced account of the mind-body problem, the alternative current theories of mind, and the basic ideas of quantum mechanics. * Paul Davies, The Australian and New Zealand Physicist *
I regard The Mind Matters as a landmark. * David Tompsett, Network *
a worthwhile contribution to an important debate. It is well written, his philosophy sound, and the description of quantum physics one of the best ever offered for the non-specialist. * Danah Zohar, Independent on Sunday *
In this large-scale and ambitious work Hodgson attacks a modern orthodoxy. Both its proponents and its opponents will find it compelling reading. * J. R. Lucas, Merton College, Oxford *

David Hodgson is a judge of the Supreme Court of New South Wales. His previous publication with Oxford University Press is Consequences of Utilitarianism (1967).

GOR003586515
The Mind Matters: Consciousness and Choice in a Quantum World by David Hodgson
David Hodgson
Clarendon Paperbacks
Used - Very Good
Paperback
Oxford University Press
1993-02-04
496
0198240686
9780198240686
N/A
Book picture is for illustrative purposes only, actual binding, cover or edition may vary.
This is a used book - there is no escaping the fact it has been read by someone else and it will show signs of wear and previous use. Overall we expect it to be in very good condition, but if you are not entirely satisfied please get in touch with us.