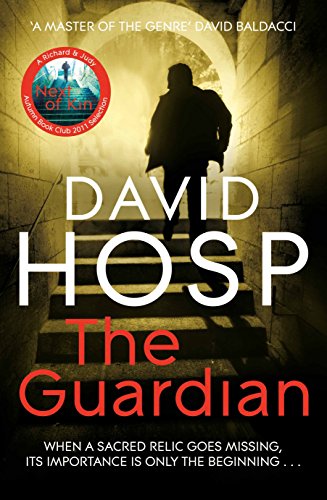 The Guardian by David Hosp

When a sacred relic goes missing, its importance is only the beginning . . .

The Guardian by David Hosp

When a CIA informant from Kandahar is gunned down in a suburban area of Virginia outside D.C., special Agent Jack Saunders is tasked with uncovering a plot that could alter the fate of Afghanistan and unsettle a tepid peace in the Middle East. But when a raid on a radical safe house goes horribly wrong, Jack finds himself without support within his own government.

Determined to find answers on his own, Jack enlists the aid of Cianna Phelan, a disgraced former war hero trying to put her life back together. When Cianna's brother, Charlie, returns to South Boston from active duty in Afghanistan and immediately goes missing, Cianna and Jack find themselves in a race against time not only to save his life, but to prevent an international conspiracy at the highest levels of the US intelligence community. As lives are lost in the warrens of Boston's clannish underworld, Jack and Cianna realize they are on the trail of one of the most sacred artefacts in all of Islam. And when the bullets start to fly, they realize they can never know whom to trust, and nothing is what it seems.

'It is the detail and subplots that make Hosp such a gripping writer. He creates real dilemmas for his characters and saves the most touching resolution to the very end... Hosp is growing and developing with each new book'

David Hosp is a trial lawyer who spends a portion of his time working pro bono on behalf of wrongly convicted individuals. He finds time to write his novels on his daily commute by boat across Boston harbour. He lives with his wife and family in the city.
GOR010630276
9780230761087
0230761089
The Guardian by David Hosp
David Hosp
Used - Like New
Paperback
Pan Macmillan
2012-08-02
384
N/A
Book picture is for illustrative purposes only, actual binding, cover or edition may vary.
The book has been read, but looks new. The book cover has no visible wear, and the dust jacket is included if applicable. No missing or damaged pages, no tears, possible very minimal creasing, no underlining or highlighting of text, and no writing in the margins
Trustpilot