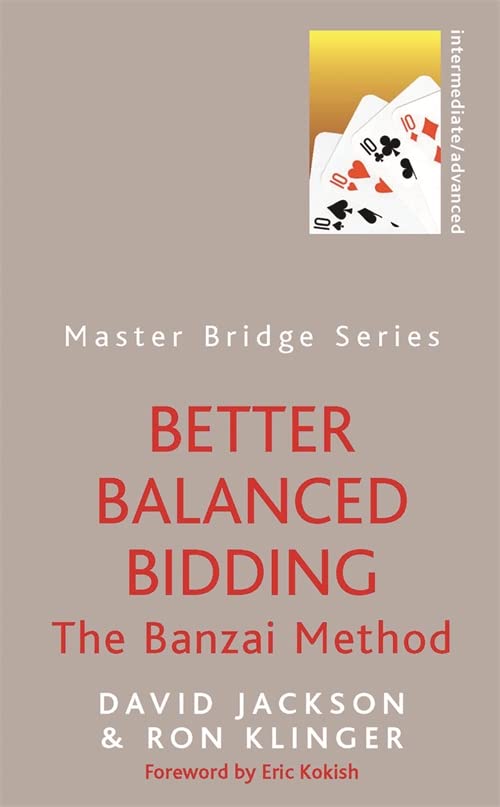 In Stock
$18.99
inc. GST
An exciting new book introducing the Banzai Method - a method of hand evaluation that will add a further dimension to Milton Work's method - advanced by David Jackson and Ron Klinger.
Very Good
Only 1 left

This is an important, and in some ways revolutionary, book. The point count method of hand evaluation was first proposed in 1914 and popularized in 1934 by Milton Work. The Banzai Method advanced by David Jackson and Ron Klinger improves on Milton Work by reassessing the relative values of the honour cards but also adds a further dimension to accurate hand evaluation by including the tens and is of crucial importance when assessing balanced hands. According to Eric Kokish, an internationally respected American authority, who has contributed the Foreword, the many example deals are an eye-opener. When you finish this book, it is unlikely that you are going to look at your hand the same way as you have in the past.

"This book is quite brilliant, a revolution, and a revelation. Expert thinking in hand evaluation has been turned on its head. A must-read for the serious bridge player." "Bridge Books & Supplies""

David Jackson was the non-playing captain of the Irish international bridge team from 2005 to 2012 and a noted statistician.

Ron Klinger is a leading international bridge teacher and has represented Australia in over 20 world championships since 1976. An Australian Grand Master and a World Bridge Federation International Master, he has written over 60 books, some of which have been translated into Bulgarian, Chinese, Danish, French, Hebrew and Icelandic. Two of his titles - Guide to Better Card Play and Right Through the Pack Again - won Book of the Year awards. He has created many new bridge ideas and devised a number of conventions. He lives in NSW, Australia, and has written a daily bridge column in The Sydney Morning Herald and The Sun-Herald for over 15 years.

GOR001709088
Better Balanced Bidding: The Banzai Method by David Jackson
David Jackson
Master Bridge
Used - Very Good
Paperback
Orion Publishing Co
2010-02-11
144
0297859986
9780297859987
N/A
Book picture is for illustrative purposes only, actual binding, cover or edition may vary.
This is a used book - there is no escaping the fact it has been read by someone else and it will show signs of wear and previous use. Overall we expect it to be in very good condition, but if you are not entirely satisfied please get in touch with us.