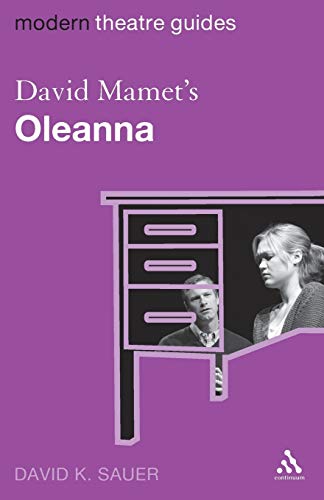 Used Price
$13.99
inc. GST
Free Shipping in Australia
David Mamet is widely considered the voice of contemporary American Theatre. His use of what is taken to be realistic language together with minimalist staging creates a postmodern combination which simultaneously pushes an audience in conflicting directions. This book presents a critical introduction to Mamet's modern college classic, "Oleanna".
Very Good

This book presents an accessible, informative and critical introduction to Mamet's modern college classic, "Oleanna". David Mamet is widely considered the voice of contemporary American Theatre. His use of what is taken to be realistic language together with minimalist staging creates a postmodern combination which simultaneously pushes an audience in conflicting directions. The result is that initial audiences for "Oleanna" were aroused to applaud and loudly react to the ending of the play when a male teacher beats a female student. The issues the play raises about political correctness are turned on their head."Oleanna" is a particularly complex play in terms of both form and content and this guide offers a theoretically informed introductory analysis. It provides students with a comprehensive critical introduction to the play and includes new interpretations of the play text in light of Mamet's recent playwriting developments and the intervening shifts in the political landscape."Continuum Modern Theatre Guides" offer concise, accessible and informed introductions to the key plays of modern times. Each book is carefully structured to offer a systematic study of the play in its biographical, historical, social and political context, an in-depth study of the text, an overview of the work's production history including screen adaptations, and practical workshopping exercises. They also include a timeline and suggestions for further reading which highlight key critical approaches. This will enable students to develop their understanding of playwrights and theatre-makers, as well as inspiring them to broaden their studies.

"David Sauer has taken a key play in the 20th century canon, and, with critical insight and analytic skills, explained what made it such a key theatrical, but also social and political event. Mamet's Oleanna touched a nerve in American society. Sauer explains just why that was so without forgetting that it is first and foremost a deeply impressive dramatic work." - Professor Christopher Bigsby, School of American Studies, University of East Anglia, UK
Mentioned in The Bookseller, 10 April 2009.

David Sauer is Professor of English at Spring Hill College, USA. He is President of the David Mamet Society and has published widely on Mamet, including David Mamet: A Resource and Production Sourcebook (with Janice Sauer, Praeger, 2003).

General Preface; 1. Background and Context; 2. Analysis and Commentary; 3. Oleanna in Performance: Less is More; 4. Workshopping the Text: 'Whatever side you take, you're wrong'; 5. Conclusion; Timeline 1945-60; Further Reading; Bibliography; Index.

GOR002941601
David Mamet's Oleanna by David Sauer
David Sauer
Used - Very Good
Paperback
Bloomsbury Publishing PLC
2009-01-06
128
0826496466
9780826496461
N/A
Book picture is for illustrative purposes only, actual binding, cover or edition may vary.
This is a used book - there is no escaping the fact it has been read by someone else and it will show signs of wear and previous use. Overall we expect it to be in very good condition, but if you are not entirely satisfied please get in touch with us.