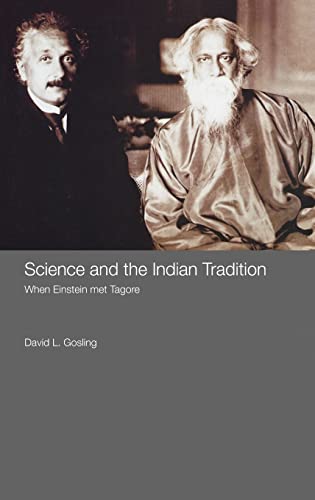 Science and the Indian Tradition
by David L. Gosling (University of Cambridge, UK)

Out of Stock
$141.99
inc. GST
Charting an important process in modern Indian history, this book gives an assessment of the introduction of Western science into India. It is intended for scholars of Indian history and those interested in the interaction between Western and Indian traditions of intellectual thought.
Very Good
Only 0 left

Science and the Indian Tradition Summary

This new text is a detailed study of an important process in modern Indian history. During the late nineteenth and early twentieth century, India experienced an intellectual renaissance, which owed as much to the influx of new ideas from the West as to traditional religious and cultural insights.

Gosling examines the effects of the introduction of Western science into India, and the relationship between Indian traditions of thought and secular Western scientific doctrine. He charts the early development of science in India, its role in the secularization of Indian society, and the subsequent reassertion, adaptation and rejection of traditional modes of thought. The beliefs of key Indian scientists, including Jagadish Chandra Bose, P.C. Roy and S.N. Bose are explored and the book goes on to reflect upon how individual scientists could still accept particular religious beliefs such as reincarnation, cosmology, miracles and prayer.

Science and the Indian Tradition gives an in-depth assessment of results of the introduction of Western science into India, and will be of interest to scholars of Indian history and those interested in the interaction between Western and Indian traditions of intellectual thought.

Science and the Indian Tradition Reviews

"... splendid new book. It is very exciting and contains much more than the exchange between Einstein and Tagore....It really is a very great achievement"- John Bowker, Emeritus Professor of Theology, University of Cambridge.

'Be prepared for substantial chapters on a number of intertwined topics, but be prepared also to enjoy this most instructive account of a complex encounter between civilisations and thought-worlds. Somehow Gosling also manages to tell us where physics in general has got to, in a manner which seems rather understandable to the non-expert in that field.'- Marburg Review

'This is a book that is important both for the solid information it offers and for the way it discusses the issues involved with fairness and a rational mind. There is much that is pure science, much more that is philosophy and an understream of religiosity and mysticism' - G. Gispert-Sauch, Journal of Theological Reflection, July 2008

'The book is indispensable for those who are interested to learn about the effects of Western Science on the Indian subcontinent and in the interactions between Western and Indo-Pak tradtitions of intellectual thought...A conversation between Rabindranath tagore and Alvert Einstein is also one of the merits of the book which, undoubtedly, makes it an essential and thoroughly entertaining read' - The Frontier Post, September 2008

'Students and scholars can draw much inspiration from this storehouse of interdisciplinary data and ideas. It is a most useful volume for all library collections and specialised courses on science and religion.' - Ursula King, Institute for Advanced Studies, University of Bristol and School of Oriental and African Studies, University of London 2009

Dr David L. Gosling is the principal of Edwardes College, Peshawar University, Pakistan, and also teaches ecology in the University of Cambridge, where he was the first Spalding Fellow at Clare Hall. He has been the Director of Church and Society of the World Council of Churches, and is the author of Religion and Ecology in India and Southeast Asia.

1. Introduction 2. Science in India's Intellectual Renaissance 3. Tradition Redefined 4. Worldviews in Encounter 5. Relativity and Beyond 6. Indian Science Comes of Age 7. An Investigation into the Beliefs of Indian Scientists 8. How Clear Reason's Stream? 9. Looking to the Future. Appendix A: The Nature of Reality. Appendix B: Investigation Questionnaire

GOR010185649
Science and the Indian Tradition: When Einstein Met Tagore by David L. Gosling (University of Cambridge, UK)
David L. Gosling (University of Cambridge, UK)
India in the Modern World
Used - Very Good
Hardback
Taylor & Francis Ltd
2007-05-08
194
0415402093
9780415402095
N/A
Book picture is for illustrative purposes only, actual binding, cover or edition may vary.
This is a used book - there is no escaping the fact it has been read by someone else and it will show signs of wear and previous use. Overall we expect it to be in very good condition, but if you are not entirely satisfied please get in touch with us.