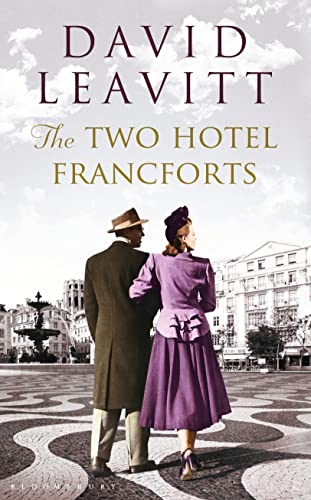 It is the summer of 1940, and Lisbon is one of the only neutral ports left in Europe - a city filled with spies, crowned heads and refugees of every nationality, tipping back absinthe to while away the time until their escape. Awaiting safe passage to New York on the S. S. Manhattan, two couples meet: Pete and Julia Winters, expatriate Americans fleeing their sedate life in Paris; and Edward and Iris Freleng, elegant, independently wealthy, bohemian, and beset by the social and sexual anxieties of their class. Swept up in the tumult, the hidden currents of the lives of these four characters - Julia's status as a Jew, Pete and Edward's affair, Iris's increasingly desperate efforts to save her tenuous marriage - begin to come loose. This journey will change the four of them irrevocably, as Europe sinks into war.

A highly accomplished, urbane and satisfying novel ... Splendid * Literary Review *
Decoys, fake names, doubles and puzzles abound in this carefully constructed novel. I sensed Leavitt having fun with the layered intricacies of his narrative ... somewhat Waugh-esque * Financial Times *
Brave and risky ... Mr Leavitt is a fluent, clever write with a habit of playing with historical fact - which explains what might seem the failings of this curious yet absorbing book ... Mr Leavitt has such a page-turning craft that you read on enthusiastically, only to find that he has thoroughly subverted the story. It's a disconcerting mixture, not least for anyone who dares to write the next historical novel * International Herald Tribune *
This is a sublime novel that captures the mood of a continent about to be subsumed in war through the fate of the human flotsam and jetsam caught in its tide. I have loved David Leavitt since his 2000 novel Martin Bauman and hope this will bring him to yet wider UK audience * Bookseller *
We can always count on David Leavitt to bring buried desires to the surface and give the uncertainties of an era startling clarity in his fiction. Here in his glorious new novel, with his characters on the run from war and suspended in a precarious state of exile, he traces their efforts to create meaningful lives amidst the turmoil surrounding them. The result is a book that is artful, gripping, delicate, and fierce * Joanna Scott, Pulitzer Prize finalist and author of Follow Me *
Charged psycho-sexual drama ... Written in finely-honed prose and brief, elegant chapters, this evocative and atmospheric novel awakens us to our own expectations even as its characters' eyes are opened * Daily Mail *
If you think of Irene Nemirovsky's Suite Francaise reimagined by Alan Hollinghurst, you get the picture ... Leavitt paces his narrative with skill, and carefully doles out the truth about his characters to keep you turning the pages ... Never quite what it seems and never fails to intrigue * The Times *
Utterly unpredictable and quite brilliant ... We leave Lisbon breathless and utterly dazzled ... One of the major voices of contemporary fiction. Moving, ravishing and fiercely ambitious, this is a novel to treasure * Observer *
Atmospheric * International New York Times Notable Books of 2013 *

David Leavitt's fiction has been a finalist for the PEN/Faulkner Prize, the National Book Critics' Circle Award and the LA Times Fiction Prize, and shortlisted for the IMPAC Dublin Award. His writing has appeared in the New Yorker, the New York Times, Harper's and Vogue, among other publications. He lives in Gainesville, Florida, where he is Professor of English at the University of Florida and edits the literary magazine Subtropics.

GOR005303887
The Two Hotel Francforts by David Leavitt
David Leavitt
Used - Very Good
Hardback
Bloomsbury Publishing PLC
2013-11-07
272
074758169X
9780747581697
N/A
Book picture is for illustrative purposes only, actual binding, cover or edition may vary.
This is a used book - there is no escaping the fact it has been read by someone else and it will show signs of wear and previous use. Overall we expect it to be in very good condition, but if you are not entirely satisfied please get in touch with us.