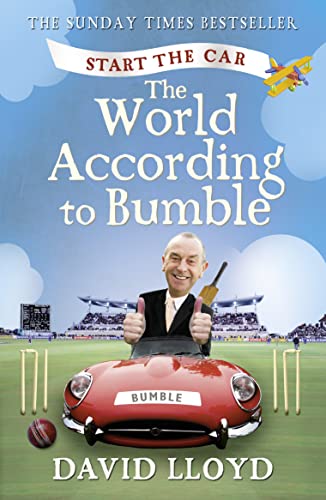 Start the Car
by David Lloyd

Welcome to the weird and wonderful world of "Bumble", the legendary SkySports cricket commentator who's one ball short of an over and delivers madcap moments galore in this ebullient, endearing and hilarious new book.

Start the Car: The World According to Bumble by David Lloyd

Welcome to the weird and wonderful world of "Bumble", the legendary SkySports cricket commentator who's one ball short of an over and delivers madcap moments galore in this ebullient, endearing and hilarious new book.

David "Bumble" Lloyd is a legend in our living rooms, a genuine "good bloke" all cricket fans feel they know inside out because of his infectious, larger-than-life personality and that distinctive Lancashire burr.

Bumble has become the one constant for passionate English fans in cricket's rapidly changing landscape. He has earned cult status as a commentator and pundit, with viewers loving his unerring dedication to the game's great fables.

The World According to Bumble: Start the Car revels in the quirkier and humorous side of cricket, while offering behind-the-scenes action of Lloyd's years spent following cricket around the globe, from Accrington to Lahore.

Bumble waxes lyrical on everything from the genius of Shane Warne to the merits of Lancashire's premier pies ... and the delights of finishing the day with a couple of pints and a curry.

Enjoy the camaraderie that exists among the SkySports team - including former England captains Sir Ian Botham, Michael Atherton, Nasser Hussain and David Gower - and laugh out loud at the stories and anecdotes which have forged Bumble's character.

Whether he is holding up play to retrieve lost balls from the top of sight-screens, or enacting mock pitch reports from car parks, Bumble is capable of stealing the limelight at all times.

`The best cricket book of the year...laugh out loud funny' --Daily Mail

`For comedy genius, David Lloyd takes the (half) biscuit'--Times Online

`In this book Lloyd revels in the quirkier and humorous side of cricket, while offering behind-the-scenes action of his years spent following cricket round the globe'--Nottingham Post

David Lloyd, aka "Bumble", is a former Lancashire and England cricketer who also coached both sides. He first came to prominence on the iconic Test Match Special radio show before becoming a leading member of the SkySports cricket commentary team, and the face of their Twenty20 coverage. He writes a fortnightly column for the Daily Mail, a blog on the SkySports website, and appears regularly on Cricinfo's cricket podcast. Bumble is a popular after-dinner speaker and has also been a star turn in Countdown's Dictionary Corner.

GOR002744322
Start the Car: The World According to Bumble by David Lloyd
David Lloyd
Used - Very Good
Paperback
HarperCollins Publishers
2011-04-14
320
0007382871
9780007382873
N/A
Book picture is for illustrative purposes only, actual binding, cover or edition may vary.
This is a used book - there is no escaping the fact it has been read by someone else and it will show signs of wear and previous use. Overall we expect it to be in very good condition, but if you are not entirely satisfied please get in touch with us.