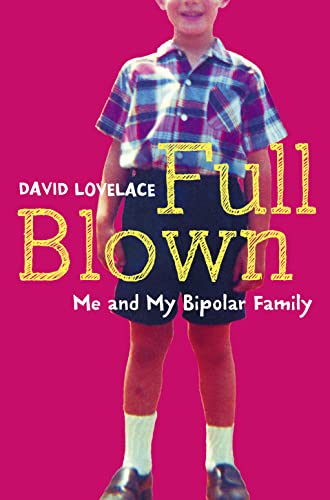 David Lovelace, along his brother and both his parents, is bipolar. This is his extraordinary and vivid memoir of life within his memorable, maddening, loving and unique family.

Full Blown: Me and My Bipolar Family by David Lovelace

David Lovelace, along his brother and both his parents, is bipolar. This is his extraordinary and vivid memoir of life within his memorable, maddening, loving and unique family.

Full Blown is Lovelace's poignant, humorous, and vivid account of growing up and coming to terms with the highs and lows of manic depression.

David's father was a Princeton-trained theology professor deemed too eccentric for the ministry and his mother battled depression all her life. Manic episodes were part of family life - they called them the 'whim-whams'. David was a teenager when his first serious depression hit, and at college when he first became manic. He ran to escape it - to Mexico, South America and then New York, to drugs and alcohol - before he realised the futility of running.

A father himself, a son and a brother, David's matter-of-fact approach to growing up surrounded by the unique creativity often sparked by manic depression is compelling. In the vein of Stuart, A Life Backwards and Augusten Burroughs' Running with Scissors , David's poetic ability to detail the unique highs and harrowing lows makes a remarkable and gripping read.

`David Lovelace's observation of manic depression - his own, and his family's - is a brilliant, comic work of art. He's the infinitely talented man who's seen another country more clearly than anyone else, and has come back to tell us about it - its wonders, and its startling familiarity. Read this book.' - William Monahan, Academy Award winning screenwriter of
The Departed and author of The Lighthouse

David Lovelace is a writer, carpenter and former owner of The Montague Bookmill, a bookstore near Amherst, Massachusetts. His poetry has been nominated for a Pushcart Prize as well as the Paterson Literary Review's Allen Ginsberg Award. Lovelace lives with his wife and children in western Massachusetts.

GOR002000781
Full Blown: Me and My Bipolar Family by David Lovelace
David Lovelace
Used - Very Good
Paperback
HarperCollins Publishers
2010-02-04
304
0007281323
9780007281329
N/A
Book picture is for illustrative purposes only, actual binding, cover or edition may vary.
This is a used book - there is no escaping the fact it has been read by someone else and it will show signs of wear and previous use. Overall we expect it to be in very good condition, but if you are not entirely satisfied please get in touch with us.