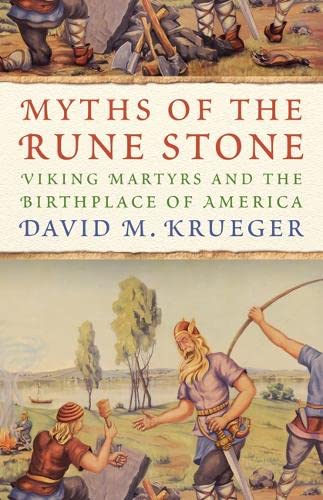 Myths of the Rune Stone
by David M. Krueger

Out of Stock
$40.99
inc. GST
What do our myths say about us? Why do we choose to believe stories that have been disproven? David M. Krueger takes an in-depth look at a legend that held tremendous power in one corner of Minnesota, helping to define both a community's and a state's identity for decades.In 1898, a Swedish immigrant farmer claimed to have discovered a large rock w
Very Good
Only 0 left

Myths of the Rune Stone Summary

Myths of the Rune Stone: Viking Martyrs and the Birthplace of America by David M. Krueger

What do our myths say about us? Why do we choose to believe stories that have been disproven? David M. Krueger takes an in-depth look at a legend that held tremendous power in one corner of Minnesota, helping to define both a community's and a state's identity for decades.

In 1898, a Swedish immigrant farmer claimed to have discovered a large rock with writing carved into its surface in a field near Kensington, Minnesota. The writing told a North American origin story, predating Christopher Columbus's exploration, in which Viking missionaries reached what is now Minnesota in 1362 only to be massacred by Indians. The tale's credibility was quickly challenged and ultimately undermined by experts, but the myth took hold.

Faith in the authenticity of the Kensington Rune Stone was a crucial part of the local Nordic identity. Accepted and proclaimed as truth, the story of the Rune Stone recast Native Americans as villains. The community used the account as the basis for civic celebrations for years, and advocates for the stone continue to promote its validity despite the overwhelming evidence that it was a hoax. Krueger puts this stubborn conviction in context and shows how confidence in the legitimacy of the stone has deep implications for a wide variety of Minnesotans who embraced it, including Scandinavian immigrants, Catholics, small-town boosters, and those who desired to commemorate the white settlers who died in the Dakota War of 1862.

Krueger demonstrates how the resilient belief in the Rune Stone is a form of civil religion, with aspects that defy logic but illustrate how communities characterize themselves. He reveals something unique about America's preoccupation with divine right and its troubled way of coming to terms with the history of the continent's first residents. By considering who is included, who is left out, and how heroes and villains are created in the stories we tell about the past, Myths of the Rune Stone offers an enlightening perspective on not just Minnesota but the United States as well.

Myths of the Rune Stone Reviews

"David M. Krueger's multi-faceted analysis of the `cult' of the Kensington Rune Stone adds to recent scholarship on collective memory and the invention of identity. I know of no other study that so effectively traces change over time in both audience and allure of a foundational myth that allows it to persist despite almost universal scientific rejection."-Mary Lethert Wingerd, author of North Country: The Making of Minnesota

"Myths of the Rune Stone moves far past the Rune Stone's legitimacy to explain how and why the stone fascinated and even obsessed such a wide swath of Minnesota's European-descended population. The heart of this book is the story it tells about the persistent renewal of the Rune Stone story across a century of doubt."-Jon Butler, Yale University

"This first comprehensive book about the popular meaning of the Kensington Rune Stone is a welcome contribution to the study of its historiography and to the impact of local culture on an American origin myth." -Minnesota Historical Society

"Krueger's book is a thoughtful examination of the competing claims of Nordic-Americans, Catholics, Christian fundamentalists, and Minnesotans in general to turn the KRS into a foundational support for their various efforts to find a place atop the American social hierarchy. It is well worth the read and a rewarding reading experience."-Jason Colavito

"Krueger digs deep into how its myth demonstrates a complicated relationship with history, heritage, and belief in Minnesota and America itself."-Minnesota Monthly

"By tracing the evolution of the Rune Stone story, [Krueger] helps us to understand the needs and motivations that give rise to these myths. Perhaps these insights can help us to form sharper distinctions between historiography and myth-making."-Religion Dispatches

"An entertaining and informational read."-Journal of Folklore Research

"Myths of the Rune Stone will certainly generate interest in Minnesota and the Upper Midwest, but it should also be useful in the classroom as a coda to the ever-popular course on Viking history or mythology."-H-Net Reviews

"Myths of the Rune Stone illuminates a debate about collective identity that is ever relevant to today's Minnesota."-Scandinavian Studies

"An interesting and ultimately convincing account of the various ways in which the use of the martyr myth informed the use of the Kensington Rune Stone to address various social and political agendas."-Journal of the Iowa Archeological Society

"Krueger's study makes a valuable contribution to regional and immigration history and elucidates the role that civil religious rituals play in defining a community's identity."-The Annals of Iowa

"In Myths of the Rune Stone, David M. Krueger provides an exhaustively researched, accessibly written, and at times humorous examination of the rhetoric surrounding the Kensington Rune Stone."-Winterthur Portfolio

David M. Krueger is a scholar and teacher with a PhD in religion from Temple University and a master's degree from Princeton Theological Seminary.

Preface
Introduction: A Holy Mission to Minnesota
1. Westward from Vinland: An Immigrant Saga by Hjalmar Holand
2. Knutson's Last Stand: Fabricating the First White Martyrs of the American West
3. In Defense of Main Street: The Kensington Rune Stone as a Midwestern Plymouth Rock
4. Our Lady of the Runestone and America's Baptism with Catholic Blood
5. Immortal Rock: Cold War Religion, Centennials, and the Return of the Skraelings
Conclusion: The Enduring Legacy of American Viking Myths
Acknowledgments
Notes
Bibliography
Index

GOR010260110
Myths of the Rune Stone: Viking Martyrs and the Birthplace of America by David M. Krueger
David M. Krueger
Used - Very Good
Paperback
University of Minnesota Press
2015-10-01
232
0816696969
9780816696963
N/A
Book picture is for illustrative purposes only, actual binding, cover or edition may vary.
This is a used book - there is no escaping the fact it has been read by someone else and it will show signs of wear and previous use. Overall we expect it to be in very good condition, but if you are not entirely satisfied please get in touch with us.