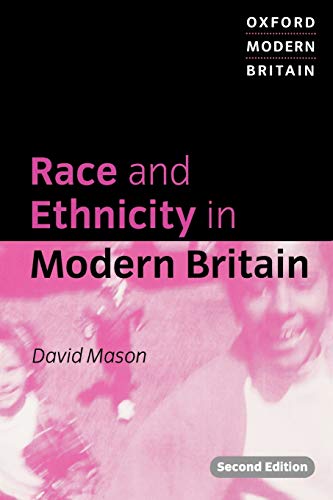 Race and Ethnicity in Modern Britain
by David Mason

In Stock
$10.99
+10% GST
An introduction to race and ethnicity in new-millennium English society. This new edition includes a chapter on the criminal justice system in the wake of the Stephen Lawrence inquiry. The first chapters set out key concepts and issues, while subsequent ones explore the historical background.
Very Good
9 in stock

Race and Ethnicity in Modern Britain by David Mason

The Oxford Modern Britain series comprises authoritative introductory books on all aspects of the social structure of modern Britain. Lively and accessible, the books will be the first points of reference for anyone interested in the state of contemporary Britain. They will be invaluable to those taking courses in the social sciences. This is an expanded second edition of a well-established introduction to the role and importance of race and ethnicity in contemporary British society, relevant to students of sociology and many other disciplines. All sections of the book have been revised to include the most recently available data. A new chapter has been added on the criminal justice system in the light of the Stephen Lawrence enquiry. In addition the sections on citizenship have been revised to take account of recent developments. The first chapters set out some of the key conceptual issues in the study of race and ethnicity in modern Britain. Subsequent chapters examine the historical background to migration and ethnic diversity. Drawing attention to a key distinction between difference and diversity, the book examines the interplay of inequality, citizenship, and public policy in a number of areas central to life in modern Britain, including: employment, education, housing, health, criminal justice and political representation. The book concludes with a look to the future to assess how a range of trends, including developments in the European Union, the resurgence of racism, and developing patterns of social mobility may pose challenges for the shape and direction of British society as it enters a new millennium.

David Mason is Professor of Sociology, and Assistant Dean for Research in the faculty of Human Sciences at the University of Plymouth where he has worked since 1994. Previously he had spent some twenty years at the University of Leicester. His long-standing research interests have been in the sociology of race and ethnicity, and he is well known for his work on labour market issues and equal opportunities. He has undertaken research funded by bodies as diverse as ESRC, the Department for Education and Employment, and the English National Board for Nursing, Midwifery, and Health Visiting. Recent work includes research into the recruitment of ethnic minority nurses and on equal opportunities in the armed forces. His publications include Theories of Race and Ethnic relations (CUP 1986) jointly edited with John Rex, and Race and Ethnicity in Modern Britain 1/e, (OUP 1995). He is currently joint Editor of Sociology, the journal of the British Sociological Association and Chair of the Heads

GOR001431699
Race and Ethnicity in Modern Britain by David Mason
David Mason
Oxford Modern Britain
Used - Very Good
Paperback
Oxford University Press
2000-04-01
184
0198742851
9780198742852
N/A
Book picture is for illustrative purposes only, actual binding, cover or edition may vary.
This is a used book - there is no escaping the fact it has been read by someone else and it will show signs of wear and previous use. Overall we expect it to be in very good condition, but if you are not entirely satisfied please get in touch with us.