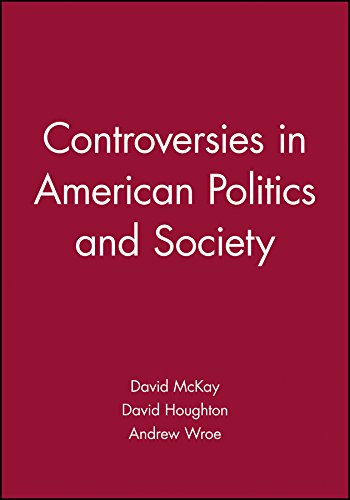 Controversies in American Politics and Society
by David McKay

Used Price
$19.49
inc. GST
Free Shipping in Australia
This work provides students with up-to-date reviews of the main controversies in American politics and society and is designed to complement David McKay's "American Politics and Society". The book stimulates students' interest by offering a range of arguments for and [against particular positions.
Reviews:
Trustpilot
Very Good Good

Controversies in American Politics and Society by David McKay

Controversies in American Politics and Society provides students with up-to-date reviews of the main controversies in American politics and society. Designed particularly to complement David McKay's best-selling American Politics and Society (Fifth Edition, 2001), it can also be used alongside other similar texts, to supply a more in-depth discussion of key American political and social issues. The controversies are divided broadly into those involving the institutions and processes of government and those involving government policies. Some of the debates, such as abortion and gun control, are part of every day discourse, while others, such as the role of Federalism, are debated in the quality media and among academics. The book stimulates students' interest by offering a range of arguments for and against a particular position. In presenting the controversies, each of the three authors takes a considered position, while ensuring that the reader gains a full appreciation of all sides of the debate.

"This book explores the most interesting and highly contested topics in contemporary American politics. It is well researched and accessible. The balanced analysis of the protagonists' argument invites the reader to reflect on and join in the debate". Dr Sue Pryce, University of Nottingham "A welcome contemporary text that places significant controversial issues in twenty first century American politics and society within a historical context". Robert Melville, Canterbury Christ Church University College "delivers a series of short, direct chapters on specific issue debates. Most are excellent first introductions to their subjects; sections on capital punishment and gun control stand out especially. The attempt to resolve social science's discomfort with the emotional voices aroused by many issues is notable. The authors' willingness to adopt these voices as an explanatory tool is both refreshing and engaging." Jon Herbert, Keele University, Times Higher Education Supplement, November 2002

David McKay is Professor of Government at the University of Essex. He is the author or co-author of numerous books and papers on American and comparative politics, including the best-selling American Politics and Society (5th edition, Blackwell Publishers, 2001).


David Houghton is Lecturer in Government at the University of Essex. He is the author of papers on US foreign policy in leading journals and of the book US Foreign Policy and the Iran Hostage Crisis (2001).

Andrew Wroe is Research Fellow in the Department of Government at the University of Essex and the author of papers on anti-immigration movements in the US and related issues.

GOR001782550
Controversies in American Politics and Society by David McKay
David McKay
Used - Very Good
Paperback
John Wiley and Sons Ltd
2002-01-03
224
0631228950
9780631228950
N/A
Book picture is for illustrative purposes only, actual binding, cover or edition may vary.
This is a used book - there is no escaping the fact it has been read by someone else and it will show signs of wear and previous use. Overall we expect it to be in very good condition, but if you are not entirely satisfied please get in touch with us.